To tie in with the sixth and final season of Peaky Blinders airing now on BBC One, UMC are releasing a blood-red vinyl edition of the official soundtrack to the series that has captivated audiences across the globe. The previous seasons are also currently available on BBC’s iPlayer and on Netflix in more than 100 countries outside of the UK.

It’s not just the low tones of Nick Cave’s vocals in the opening theme tune that have become synonymous with the BBC’s hit drama centred around Birmingham gangster Tommy Shelby, his family and their somewhat dubious business practices. Alongside the atmospheric opener, all the songs featured in the show have been painstakingly chosen to reflect the feel of the programme (the violence, the grit, AND the glamour), and the internal life of its characters. 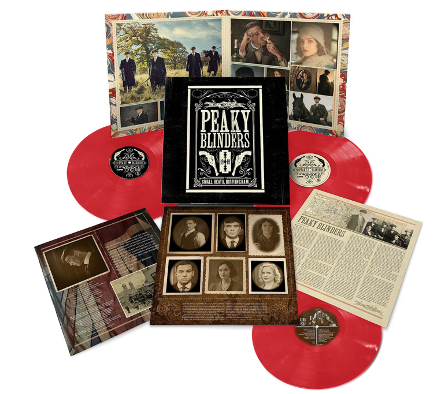 The soundtrack features the haunting rendition of the show’s iconic theme song, Nick Cave & The Bad Seeds’ Red Right Hand, plus a version recorded specifically for the show by PJ Harvey that’s only available on this soundtrack.

Also exclusively on the album are Jehnny Beth’s I’m The Man and Anna Calvi’s series 5 score, You’re Not God, along with Richard Hawley’s (Bob Dylan) Ballad of A Thin Man. The album is completed by songs from Nick Cave himself, Arctic Monkeys, The White Stripes, Royal Blood, The Last Shadow Puppets, Queens of the Stone Age, Black Sabbath, David Bowie, Laura Marling, and Foals amongst others.

The show is known for its dark and dramatic soundtrack, acting as a window into the mind of Tommy Shelby – a tortured ex-soldier who suffers from PTSD after fighting in the trenches during World War One. The 3LP set features music and key clips of dialogue from all 5 series the show.

The show has been particularly celebrated for its stylish cinematography and charismatic performances, enhanced by the use of contemporary music, and with the latest season’s score by the multi–Mercury Award Nominated singer songwriter Anna Calvi, the plaudits just kept coming. The soundtrack album also features extracts from original scores created specifically for the show.

Show Creator Steven Knight was instrumental in pushing the importance of the music used in the show: “The Peaky Blinders story and the music we use are twins, born at the same time. It would be difficult to imagine most of the pivotal moments without the soundtrack. I’m so glad that at last we have been able to put some of the tracks together on one album, to put the atmosphere and swagger and snarl of the show into your headphones and speakers.”

So, crack open a bottle of whiskey unbutton your waistcoat, relax and sit back to enjoy the music – BY ORDER OF THE PEAKY BLINDERS!