After leaving Iron Maiden, vocalist Paul Di’Anno’s solo career got off to a stuttering start with the lightweight (and modestly titled) Di’Anno, and then the short-lived (and ill-advised) NWOBHM supergroup Gogmagog. A shot at redemption came in 1985 with Battlezone, who released two hard-as-nails albums before rebranding themselves as Killers to tackle the ‘90s head-on. Killers In The Battlezone: 1986-2000 collects the first two Battlezone albums along with a Killers live set for the ultimate Battlezone overview.

For singing on two of the best Iron Maiden albums Paul Di’Anno’s legacy will be written large in the annuls of heavy metal. However, after floundering in the early ‘80s some credibility was required and Paul went back to basics with the Fighting Back album. Recorded at the tail end of the NWOBHM, this album takes its cues from that movement (including, it seems, the rudimentary production) and stakes claim to the ground inhabited by Tank and Venom. Opening with the bombastic title track, ‘(Forever) Fighting Back’ was the perfect mission statement and, at two-and-a-half minutes, it doesn’t hang around. There’s a refreshing urgency to this record, and with barely a pause for breath ‘Welcome To The Battlezone’ wheels out the heavy artillery and it’s only that thin and reedy production that prevents the band causing some serious carnage.

Di’Anno has lost none of his rough-hewn charm, and while he never was the most versatile of vocalists, in terms of character and personality he can’t be beat and Fighting Back provides ample opportunity for him to showcase his wares. Revisiting Paul’s punk roots, Battlezone was the perfect mixture of metal musicianship and punk aggression that fused into a warlike sound. Backed by a solid band that included future Overkill drummer Bob (“Sid”) Falck, guitarists John Hurley (Shanghai Tyger) and John Wiggins (Tokyo Blade) Battlezone certainly know how to rock and, truth be told, this album works best when the group throw off the shackles and let fly. ‘Warchild’, ‘Weekend Warriors’ and closer ‘Feel The Rock’ are all amphetamine infused slabs of metal and stand in marked contrast to the elongated ‘The Land God Gave To Caine’, an unnecessarily complex song that would have benefited from some judicial pruning.

The aptly titled Fighting Back found Paul Di’Anno back on track and neither some questionable arrangements (check the dodgy fade on ‘Running Blind’) or the poor production could restrain the band’s brute force.

Ironing out the problems that plagued its predecessor Children Of Madness found Battlezone sounding far more confident and filtering out their punk influences for a more metal sounding album. The explosive ‘Rip It Up’ could have been Judas Priest in their prime and found new drummer Steve Hopgood commandeering the drum stool to power the new album into life. You could say Battlezone have been slightly “Americanised” for this release and the radio-friendly nature of ‘I Don’t Wanna Know’, with its huge, anthemic chorus, has “hit single” written all over it. It’s a direction that suits Paul’s voice, it gives him more scope to display his wares and he gets low down and gravely on ‘Nuclear Breakdown’. Musically too, the band sound less frenetic and restrained, it’s as if new boys Steve Hopgood and guitarist Graham Bath (both formerly in Persian Risk) have brought some stability with them.

Children Of Madness is a well sequenced album, it flows better than Fighting Back, and the faster numbers are punctuated by slower songs, meaning that when the band rock, they rock hard. With that classic Maiden gallop, ‘Whispered Rage’ is both heavy and fleet of foot and throws the listener in a hex with time changes aplenty. It’s hard to believe that Children Of Madness was released just a year after Fighting Back because the rate of development is very noticeable. In terms of maturity, it’s a quantum leap and cuts such as ‘It’s Love’ and ‘Metal Tears’ bring an emotional depth previously unheard, with the latter being an example of an epic song that doesn’t sound forced. Cynics might say that the polished sound on Children Of Madness was a blatant stab commercial success. That might be true, but there’s no denying the quality of songs on offer, and the conviction with which they’re played shines through.

In some strange anomaly, Battlezone never broke out of the metal underground to attain global recognition, and after listening to Fighting Back and Children Of Madness that seems all the more puzzling.

To avoid any accusations of nepotism, Paul Di’Anno was always hesitant about using his name in conjunction with Battlezone, it was always at the behest of the record company, and early Di’Anno and Battlezone gigs rarely contained any Maiden covers. However, by the time Live At The Whiskey was released in 2000, he had no such qualms; his name is emblazoned largely in Iron Maiden font whilst the Killers moniker is in script that’s been lifted from said album. Therefore, the cover is a good indication of the sound contained within and Live At The Whiskey will please fans of early Maiden alongside those of Battlezone. As the first few notes of ‘Impaler’ ring out you can almost feel the waves of affection that radiate between crowd and stage (and back again) and ‘Wrathchild’ only heightens that sensation.

The demise of Battlezone and the birth of Killers is a convoluted story, and it’s one we needn’t trouble ourselves with here, but the line-up that recorded Live At The Whiskey contained three members from Children Of Madness (Di’Anno, Bath, Hopgood) along with second guitarist Gavin Cooper and Cliff Evans (bass). It’s a good combination which adds weight to latter-day Battlezone tracks such as ‘Marshall Lokjaw’ and ‘Die By The Gun’ whist turning T-Rex’s ‘Children Of The Revolution’ into an infinitely heavier, punchy beast. However, in what must have been a bug bear, the biggest cheers are reserved for the Maiden tracks, and three close this disc. A rabid crowd froth at the mouth as Killers tear through ‘Remember Tomorrow’, a truncated ‘Phantom Of The Opera’ and ‘Sanctuary’ and they’re played with such energy that this could easily be The Ruskin Arms, 1980.

These two Battlezone albums were originally re-issued by Cherry Red as an edited, single disc back in 2010. Now they finally get the treatment they warrant and come housed in a clamshell box, with bonus tracks and a detailed booklet. Highly recommended for fans of Iron Maiden, Paul Di’Anno or indeed, any form of hard-arsed heavy metal.

CD 3: Killers – Live At The Whiskey 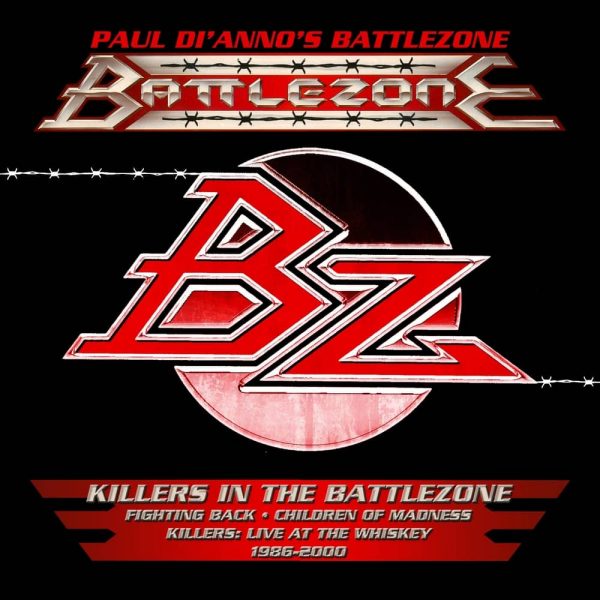