Album of the year?

Paradise Lost have been one of the most consistently innovative bands of the past 25 years. While styles have ebbed and flowed the quality that lies within their black heart has seldom been in doubt.The Plague Within has already been spoken of in wildly glowing terms – an early frontrunner for album of the year – and I’m not going to deviate wildly from that path.

A spiralling riff opens things up nicely on ‘No Hope in Sight’ before Nick Holmes joins in with a gruff vocal bark of the song’s title. A steady chug quickly ensues before a softer Holmes clean sings over the developing beat before a kaleidoscopic volcano erupts sending a cascade of rhythms flowing into every corner. As album openers go ‘No Hope in Sight’ is inspirational after which the Yorkshire veterans continue to maintain a compellingly high standard throughout, the second song ‘Terminal’ displaying an even more abrasive edge, with Holmes rougher than sandpaper.

The other side of the Paradise Lost coin is given its equally engaging chance to shine on ‘An Eternity of Lies’ a slower more ethereal number but one that still pulses with the band’s trademark intensity. The song elegantly bleeds the parallel lines of the Paradise Lost sound together, deep gruff vocals countered with a piercing falsetto, before it spirals over a waterfall of a riff wrapped up with orchestral authority.

They’ve come a long way since their 1990 debut Lost Paradise but they’ve rarely dropped a clanger, occasionally taking in different musical reference points but always standing strong as a beacon of music that both inspires and challenges. The Plague Within, their 14th studio release, is nearer in style to some of their earlier work than more recent material. Perhaps Holmes’ recent spell with death metal supergroup Bloodbath in some way rekindled his lust for the old school fire and damnation.

‘Flesh for Bone’ is certainly the nearest to it, a raw rampage that sees the fret fest notched up a few gears. With guitarist Greg Mackintosh also moving down a heavier road with his own successful side project Vallenfyre, it is perhaps only to be expected that the band have been drawn back, towards the darker corridors first explored in their early years. ‘Punishment Through Time’ will give all necks a thorough workout on the band’s upcoming UK tour, with its surging riff cutting through the mist with absolute conviction and power.

‘Beneath Broken Earth’ has a mournful bassline courtesy of Steve Edmondson that would sit perfectly well at the start of a song from a doom band, such as say The Wounded Kings. Burying its way slowly into your skull Holmes’ vocals, wonderfully grounded and evil, send this shuddering song on a funereal journey into the very vaults of your mind where thoughts of sorrow and despair are locked away with no key in sight. Beautifully executed with passion, poise and purpose, it’s an oppressive diatribe of doom that will leave you fighting for breath against its suffocating swell. The sombre but eloquent mood extends to ‘Sacrifice the Flame’ which opens with a delicately played violin, in a fashion not dissimilar to their Yorkshire neighbours My Dying Bride.

This is an album where you don’t have to wait long for standout tracks to arrive, the flow is constant, ‘Victims of the Past’ another epic sprawling soundscape bringing together the Paradise Lost traits of soaring melodies, crushing rhythms with vocals flickering from granite growls to clean harmonies that could balance peas on a knife. The darkness stalks you throughout this album, with its occasional glimpses of the atmospheric gothic grandeur that ensured Paradise Lost’s fanbase spread beyond the occasionally confined restraints of metal alone.

Penultimate number ‘Cry Out’ is the rockiest of the bunch, a real headbanging thrash affair with Holmes barking out the orders like a sergeant major inspecting the troops. There’s some great guitar work going on too with a few scything solos in the mix. Closing track ‘Return to the Sun’ is given the full treatment, a haunting choral climactic cascade laying the foundations for another majestic advance of melancholic gloom.

Plenty of groups like to bring out an album to mark some kind of landmark in time. All too frequently though, on closer inspection, it’s often only the anniversary of perhaps the one surviving original member – with a whole new crew now along for the ride. That’s a criticism that can’t be laid at the door of Paradise Lost, who 25 years on from their first release, can still boast four of the original five members. That speaks volumes for the kind of family that exists here. What Paradise Lost have, and have always had, is something special. Who in their right mind would want to walk away from that? 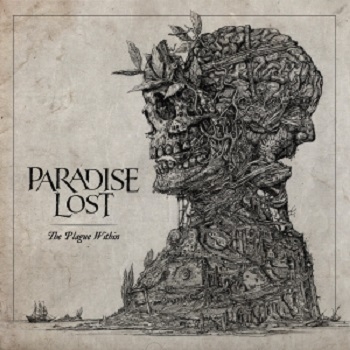