Very few bands are able to sound as fresh, innovative and influential after more than 30 years as Paradise Lost. The epoch-shifting pioneers of melodic goth doom age better than a vintage wine, as evidenced on stunning new album Obsidian.

This is their 16th album and in keeping with recent release such as Medusa (2017) and The Plague Within (2015) it shows that the Yorkshire pioneers are as engaging and enigmatic as ever. This is a sumptuous release that entices you in from the beautiful opening strands of ‘Darker Thoughts,’ after which Obsidian envelops you body and soul.

A foreboding drumroll leads straight into the more sinister sounding ‘Fall From Grace’ before Nick Holmes ruffled vocals let rip with “No Celebration for the Damned….” And as the vocals flip effortlessly from rough as bran flakes to soapy smooth, Paradise Lost start to build another seemingly effortless anthem, a spine-tingling riff hitting the sonic heights and adding a shuddering edge to the album’s emotive second song.

Such is the quality of Paradise Lost – and let’s face it it has always been there stretching back to the likes of Draconian Times (1995) and beyond – that they clearly retain the Midas Touch with very little passing through their fingers less than golden. This latest opulent offering is produced by the band with a further sheen applied by studio whizz Jamie ‘Gomez’ Arellano.

Regrettably denied a showcase slot at Bloodstock this year, no-one yet knows when their legion of followers will get to hear these new songs in the flesh. Be assured though when it does happen they’ll scarcely be a word on the album that the faithful won’t have in their memory.

‘Ghosts’ adds a bit more zip, with a definite 80s gothic feel not dissimilar to the likes of Depeche Mode before the tone deepens as they wade through the darker passages of the crush velvet glory of the shimmering Satanic slowburner, ‘The Devil Embraced’. The chilling ‘Forsaken’ carries echoes of the incomparable Bauhaus, you can almost hear Pete Murphy in the shadows waxing about the passion of lovers.

‘Ending Days’ is more of a ballad with harmonies mixed in, a haunting chorus and Gregor Mackintosh stepping forward with some vibrant six-string solo flair. Having already referenced a couple of 80s goth favourites it’s simply impossible to avoid repetition on the darkly atmospheric ‘Hope Dies Young’ which has the unmistakable imprint of Sisters of Mercy indelibly stamped through its core.

Obsidian hints at something dark and reflective and Paradise Lost are proving every bit as durable. Sixteen studio albums in 32 years is consistent and praiseworthy in itself. But to reach that landmark with a sound that retains its freshness and energy is of far greater significance. This latest release ends in stirring fashion with the battlefield lament ‘Ravenghast,’ as dark as anything that’s gone before on the album and cementing Paradise Lost’s reputation for being the most irresistible of dark lords. 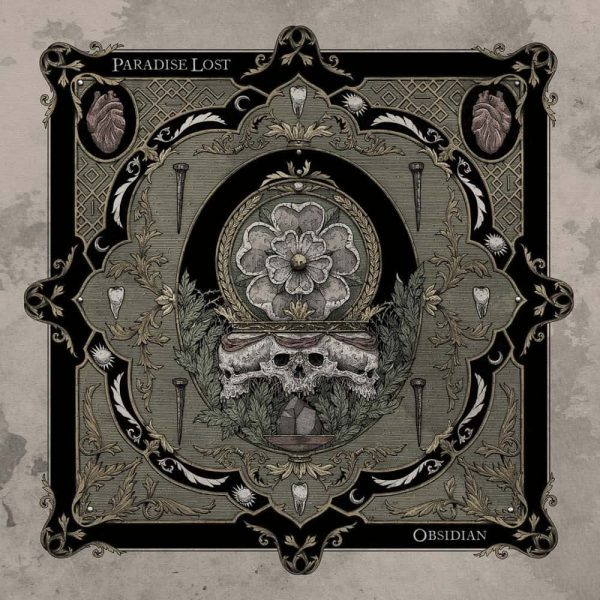