We are in the grips of Storm Eunice and her mighty breath. The 02’s toupee has been torn from it’s head just 10 miles from where we are due to gather this evening for the finale of Paradise Lost’s Obsidian Moon tour. Most likely already delayed due to you know what, the show once again hangs in the balance – fate in the hands of the windy gods. And then, with just a few hours to go, we get the message…. tonight ‘will proceed as planned.’ Although, inevitably, there will be a few fans unable to make it due to train cancellations – it’s still a victory. Live music prevails!

This is the sold-out final date of the Obsidian Moon tour, promoting their newest (ish) album Obsidian. Released in May 2020, the album was a gift for so many of us during the initial trauma and confusion of the pandemic. At the time, Paradise Lost vocalist Nick Holmes released a statement making it clear that the band were given the option to delay the album release, concerned that success may be impacted by the severity of a global lockdown. But they knew we wouldn’t want to wait. He said: ‘Music can be enjoyed in practically any environment…. We sincerely hope our new album helps to lift your spirits and is a beacon of light in the dark.’ That, it certainly was.

And then things started up again, and the band began gigging. They had a Draconian Times set at Bloodstock Open Air, and a Gothic set at Damnation Festival in Leeds shortly afterwards. These were brilliant, unique performances dedicated to much-loved albums and 90s nostalgia. However, apart from a few songs here and there, up until recently the band had had little time and space to revel in the success of their newest album.

Portuguese goths Moonspell open this evening at the Electric Ballroom in Camden Town. They’ve also had a pandemic-born album, Hermitage, released early last year. It seems somewhat of a miracle that Fernando Ribeiro is standing before us in his black leather fringed jacket, with matching fingerless gloves… hopefully a positive sign that things are beginning to subside in this never-ending pandemic. Pioneers of the 90s gothic scene, it’s fitting that they open this evening – sharing a rich history with the headliners. They play crowd favourites including the classic ‘Opium’ and the much newer but somehow just as classic ‘Breathe’. We are certainly glad that they made it: wind, Covid and all.

But tonight, we are all here to celebrate Paradise Lost’s Obsidian. A notable nosedive into their gothic past, whilst building on the growing doom tendencies witnessed in the previous two albums, this album feels heavier and gloomier than anything in the Yorkshiremen’s recent back catalogue. They open with ‘Widow’, taken from their 1993 Icon album, where they first embraced the Gothicism of the 90s. It is therefore a fitting track to open this evening, where we are celebrating a new album which is so very reminiscent of this period. The glorious ‘Forsaken’ follows, taken from Obsidian. We are then taken on quite the historical journey before we return to the present.

In fact, it’s somewhat surprising how this evening is structured. Most of the encore is built upon tracks from Obsidian, whilst classic ‘crowd-pleasers’ such as ‘One Second’ and ‘The Last Time’ earn places in the main body of the setlist. Perhaps the lads are reluctant to deliver a nostalgic conclusion, wanting to leave their newest work ringing in the ears of the crowd as they spill onto the dark streets of Camden Town. We are encouraged to look to the future.

This evening is filtered with Nick’s sarcastic wit; his favourite silence-filler is to mock the bald heads of the crowd. He calls out song requests. When he is met with a muffled, indecipherable wall of noise, he mischievously asks: ‘Smalltown Boy?’ I was always a fan of their rendition, but nevertheless, they dive into, ‘As I Die’. Probably a safer bet.

The final track is ‘Ghosts’, a gothic dance-floor anthem that proves just how eclectic this album is. It’s a toe-tapping, riff-rich tune. That’s the thing with Paradise Lost and their wonderfully varied and continually surprising sound. You may dance. You may cry. You may scream. But you will always, always, headbang. 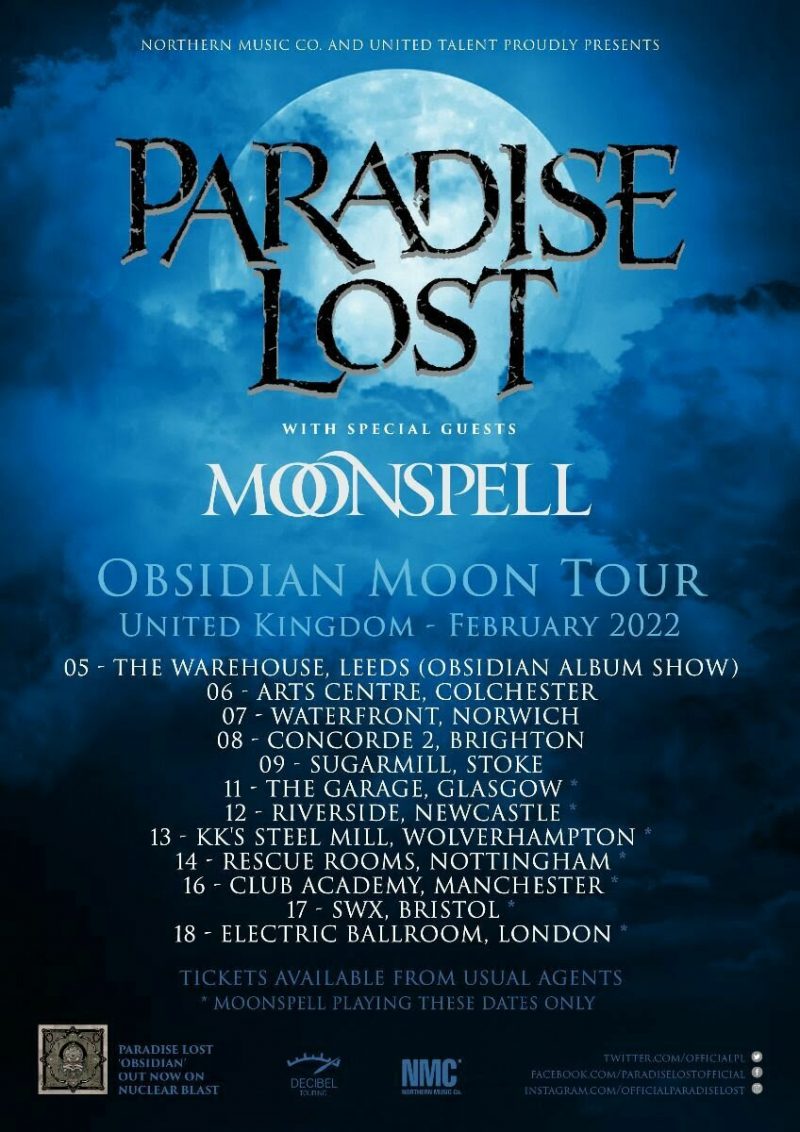