I must confess, as a 17 year old circa 2000, my musical stylings leant more towards the indie-rock persuasion rather than the so-called Nu-Metal explosion that seemed to be everywhere. Yes, I was more than partial to Limp Bizkit (when ‘Break Stuff’ drops in a club you know everyone still loses their shit,) but Papa Roach were a band I couldn’t really get away with. In fact, it was fairly common to hear the now infamous “Cut my life into pieces, this is my last resort!” lyrics being spat mockingly at the local kids decked out in black baggy pants and guy-liner. The fact that it featured on the band’s debut, multi-platinum record Infest was completely lost on me, and it would remain so until a musical epiphany at Download in 2005.

Fifteen years on and with sales in excess of twenty million, there is no doubting this band’s ability to stand the test of time. And it is clear from listening to F.E.A.R. (their eighth and latest full-length release) that Jacoby Shaddix et al have managed to evolve sound wise but still know how to create those gloriously anthemic bangers that will keep the hardcore ‘Roach contingent smiling.

My head is immediately nodding along to title track ‘Face Everything and Rise’ with its driving d’n’b /electronic sensibilities and those infectious hooks on the chorus, whilst the clean vocal lines and pop-rock sheen of ‘Skeletons’ would ensure its worthy place on any mainstream rock radio playlist. The classic PR formula can be heard on ‘Broken As Me’ and ‘Hope for the Hopeless’ – packing more meat than a butcher’s shop window, these tracks are real chest-beaters guaranteed to get the pits heaving in a live capacity.

That said, I am all for artists trying something a bit different and ‘Warriors’ will undoubtedly be the song that divides opinion – the sonic Marmite if you will. Featuring a cameo from American rapper Royce D (no, I hadn’t heard of him either), this one is chock-full of tech drenched synths and distorted vox probably more akin to Crossfaith or Pendulum than the angsty vibe of the late 90’s movement which the band originated from. I un-tick the ‘repeat’ button just long enough to give ‘Gravity’ a spin and what subsequently fills my eardrums is a beautifully introspective duet with In This Moment’s chanteuse Maria Brink. Jacoby invokes his inner Eminem and the rapped lyrics more than hint at the frontman’s personal and professional struggles, as well as reflecting on his recent, well publicized religious conversion. Brink’s contribution is a delectable fusion of pure vitriol (check out that biting solo from 2:14 onwards) and the sweetly soaring; the juxtaposition of voices combined with those massive hair (and arms) raising melodies and use of instrumentation make for the definitive standout moment on this record. Stunning.

Papa Roach might not be making history with F.E.A.R. (admittedly there is a bit of filler), but what they have managed to do on this outing is inject a freshness into their sound, without straying too far from the path thus alienating their core fanbase. And it is this willingness to push musical boundaries and not be afraid to experiment that will ultimately prevent the Californian quartet from becoming just another nostalgia band. No fear of the future needed here. Bring on the UK tour. 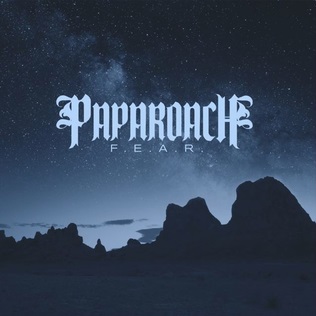