This was the first time I’d seen Panic Room for over a year, the last time being a disappointing set at HRH Prog in North Wales, where I left the show wondering just exactly where the band were going. Since then, the band have been otherwise engaged, with drummer Gavin Griffiths playing in Fish’s band, bassist Yatim Halimi with Steve Rothery, and Anne Marie Helder and Jonathan Edwards giving their time to their Luna Rossa project as well as Helder being a regular part of Mostly Autumn’s touring band. In the meantime there was a change in the guitar department and for a lot of Panic Room fans, this was going to be the first chance to see them play with stand-in guitarist Dave Foster, also last seen on the Robin stage playing in Steve Rothery’s band.

Although the publicity said ‘plus support’ there was no opening act, Panic Room coming on stage at 8.30. It had been known beforehand that they would be playing a set split between an acoustic and full electric, but even so, it was a surprise when they began the opening acoustic segment with ‘Song For Tomorrow’; one of their better known tracks, nominated for the ‘Anthem of The Year’ award by Prog Magazine a couple of years ago and the sort of song most bands would keep for the big finish. In keeping with the theme of doing things differently, while a lot of bands, when they play these acoustic sets, basically play the songs straight, the only difference being that that they’re played on acoustic rather than electric guitars. Panic Room, however, had made a clear attempt to something genuinely different with each song. Both ‘Song For Tomorrow’ and the following song ‘Screams’ had a real jazz feel, almost Steely Dan in tone. ‘I Am A Cat, restored to the set after a couple of years’ absence, was introduced by singer Anne Marie Helder as having been ‘countrified’, but sounded to these ears more like a Crosby, Stills and Nash song, whereas ‘Black Noise’, which Anne Marie described as one of their ‘metal’ songs, was supposed to have been ‘reggaefied’ yet sounded strongly like the Stranglers’ ‘Peaches’. Arguments about classification aside, this opening set was a real pleasure to hear, and credit to the band for doing something different with familiar material, as well as including a song in this segment, ‘Raining Tears And Burgundy,’ to be included on the band’s forthcoming crowd-funded acoustic album. 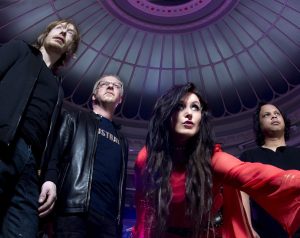 There’d been reports from the earlier part of the tour that the recruitment of Dave Foster had given the band something of a rejuvenation, and the evidence of the first couple of songs in the electric set appeared to bear that out. The tribal drums and slowly building intensity of ‘Temptation’, followed by a version of ‘Freedom To Breathe’ with a crispness, even a bite, it hasn’t had for a while, then the band again having the confidence for a bit of rearranging and giving ‘Tightrope Walking’ a little Middle Eastern feel, it was good and fascinating stuff.

The sight of Dave Foster strapping on a double necked guitar brought a chorus of ‘Stairway To Heaven’ from some of the more well refreshed members of the crowd, inspiring a brief jam from a couple of members of the band, perhaps a sign of how relaxed and comfortable the band are in the new line-up, before ‘Waterfront’ was played as if it came straight out of the Springsteen songbook. The band had promised to play something from all their albums, and for ‘Apocalypstick’, an epic from the debut album, with more Arabic undertones, it was striking how the addition of Dave Foster had brought new life into a familiar track. The exchange of solos between the guitarist and Jonathan Edwards’ synthesiser was almost worth the ticket price alone.

I’ve seen a lot of Panic Room over the years, and this was easily the best gig I’d seen them play since the departure of original guitarist Paul Davies, perhaps even longer than that. Shortly after the Robin gig, the band announced that Foster would now be a permanent member of the band, and it’s to be hoped that what appears to be a new enthusiasm and a new energy can continue. The band will soon go into the studio to record their acoustic album, but I can’t help but look forward to hearing what the new guitarist can bring to the table when it comes to writing new music. Until then, it’s time to relax in the knowledge that a band that holds such a huge amount of musical talent appears to be back on track and firing on all cylinders.