It’s another scorcher. The grass is now straw and the air is barely breathable. Metalheads, as ever defiantly dressed in black, are shoehorned into Northern Line carriages like matchsticks in a box. They descend on The Underworld in Camden with the familiar traits of defiance and dedication, my tube train journey picking up fellow comrades at each station, all exchanging looks of sweaty despair as they joined the matchstick party.

This evening The Underworld hosts imperious doom protagonists Pallbearer, following a last minute venue switch from Islington’s Assembly Hall. The reason was undisclosed but in the subterranean dungeon that is The Underworld, it was completely packed.

Support act Tuskar stormed onto the stage first for a performance quite unlike anything I have ever seen.  The two-piece, hailing from just up the road in Milton Keynes, are a deafening sludge band. With long build-ups and droning instrumental, they appear a fairly straightforward proposition. That is until you see them live. Drummer Tyler Hodges was something else. Positioned stage front, but with his microphone behind him, his face was never truly exposed as he bounced up and down on his stool, frantically and wildly crashing on the symbols by launching himself towards each one as though with no thoughts of self-preservation while Tom Dimmock fought his own personal battles with his supercharged riff patterns. 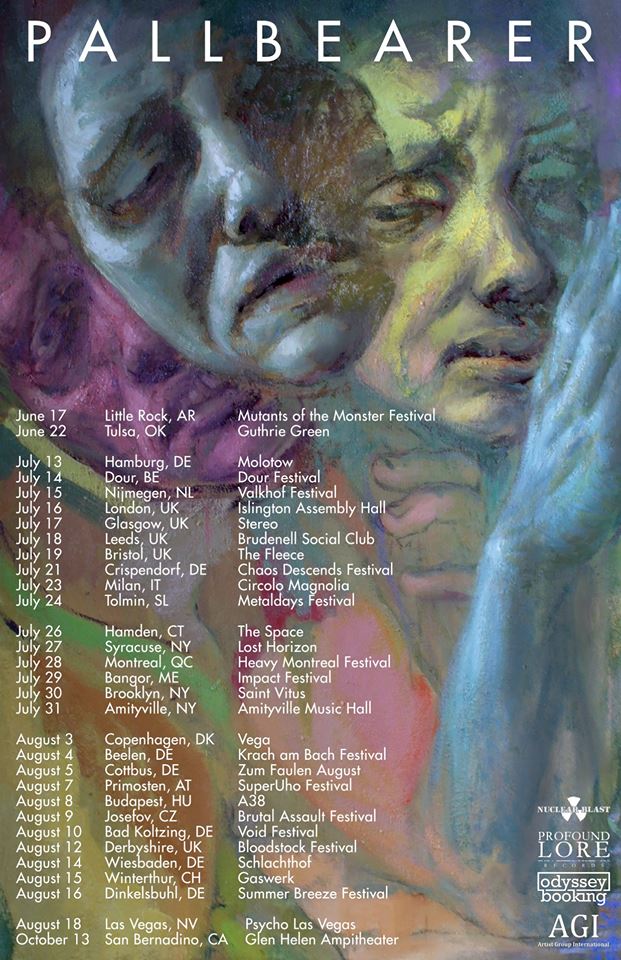 Every strike of the drums was a complete 360-degree body movement, pummeling his skins with near visceral violence. The music was pretty good stuff, but the real highlight was watching this magnificent drumming exhibition.

Pallbearer entered the stage to a melting but adoring audience. The esteemed doom ensemble released their third full-length album Heartless, just over a year ago, while their popularity and following have never stopped growing since the release of their masterful debut album Sorrow and Extinction in 2012. Pallbearer are a band who manage to continually rework and redefine the possibilities within doom.

From screaming vocals to deep droning moans and from long ring-out chords to intricate catchy riffs.  There is always a vulnerability and tangible emotion with Pallbearer that never strays far from its sublime surface. They are always interesting and fresh, even in such a sweatshop as The Underworld this evening.

Frontman Brett Campbell expressed his thrill at returning to London, after launching into their new song ‘Dropout’, released back in April. This is a melodic and haunting number with clean vocals ringing out across bluesy riffs. It is a clear shift from their best known angst-filled anthems such as ‘Foreigner’ and ‘Devoid of Redemption’, which carry a more gothic ambiance.

But this bluesy addition is interesting and opens the doors for Pallbearer to progress their sound beyond the intimate circles of doom. The boys from Little Rock let the music carry them this evening with little crowd engagement.  Instead they created an immersive atmosphere of lost souls and tormented minds. Bands like Pallbearer reveal the true narrative power of the genre. They are storytellers, at heart.

Pallbearer will be touring with the almighty System of a Down later on in the year, which once again confirms their versatility and broadening appeal. A unique sound which appeals to dedicated doom-heads as well as fans of progressive hard rock. What road will they turn down next?