Originally formed as a one-off tribute to Slayer’s Jeff Hanneman way back in 2013, Texans Overt Enemy soon evolved into an original death/thrash hybrid. After terrorising venues in their locality, they unleashed two highly rated EP’s (2018’s Inception and 2019’s Possession) collected here in the imaginatively titled Inception x Possession which adds a raft of bonus cuts to comprise a highly explosive set.

From the heavy, discombobulating breathing that heralds the arrival of ‘Inception’ to the cover of ‘At Dawn They Sleep’ the spectre of Slayer looms over their debut release. Like the most depraved midnight prowler ‘Inception’ hides in the shadows and is slightly unsettling. Things explode into life with the warlike ‘Political Cancer’ as the drums fire with machine gun rapidity and the guitars soar like phosphorous flares and it’s a relentless musical pummelling that doesn’t let up for three-and-a-half blistering minutes. Reminding me of Divine Intervention era Slayer, ‘Mercenary’ packs a hefty punch and alternates between crushing passages and an all out thrash attack. There’s good reason why Slayer are rarely covered and it takes a brave band to approach their tunes but Overt Enemy turn in a fine rendition of ‘At Dawn They Sleep’ with drummer Jaime Ayala rivalling Dave Lombardo on that solo.

Following their debut by barely a year Possession found Overt Enemy growing exponentially and forging their own style whilst tending their roots. ‘In The End We Died’ is a multi-layered affair with guitarists Leo Oritz and Rob Hahn whipping up a storm and the formers vocals have matured like oak aged whiskey. ‘Blood God’ places its hands around the listeners throat and refuses to let go as the rhythm section tighten their grip with ever decreasing circles. ‘Pray For Death’ is delivered with hardcore fury and it’s all very whiplash inducing as it races along like classic Maiden on amphetamine. With no two songs inhabiting the same sonic space there’s a hell of a lot of variety on offer and ‘Possession’ came preloaded with a heavy groove and closed the original EP by scorching the earth between your speakers.

The CD and download versions of Inception x Possession contain a host of bonus tracks and what follows are seven instrumental cuts of songs that appeared on the two EP’s. Basically, they’re the songs with the vocals removed yet they feel fresh as ‘Political Cancer’ now reveals neo-classical flourishes and ‘In The End We Died’ becomes a humongous monolith. ‘Mercenary’ was used in the 2016 horror film Blood Tapes and this version is presented in all its visceral, gory glory. Four demo tracks from 2017 round off the collection of which ‘Scapegoat’ is a definite highlight along with an elongated ‘In The End We Died’ but all are embryonic, raw cuts that nevertheless show a great deal of promise.

Having (quite rightly) recently received the Dave Ellefson seal of approval Overt Enemy are a band very much on an upward trajectory. If you like classic thrash but with a modern twist there’s no better pace to get your fix than with Inception x Possession. 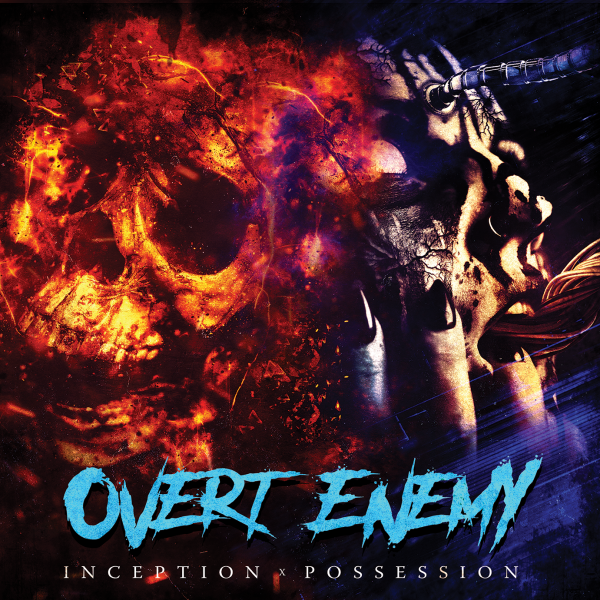