Blackened deathcore outfit OV SULFUR have shared a brutal new single titled ‘Stained in Rot’, along with a suitably nightmarish video, just in time for Halloween.

Vocalist Ricky Hoover comments: “‘Stained In Rot’ is the heaviest song I’ve been a part of vocally and lyrically. It’s about bringing to light the fact that religion and government are constantly trying to become one and change the world into a theocracy. It’s about showing the horrors that have happened under that way of thinking and control. It’s about pulling out the truth and shoving it back in the faces of religionists while the “truth” they’re forced to believe crumbles around them.”

Guitarist Chase Wilson adds: “We knew we had to release this song during The Pain Remains Tour, as it has more of a slamming, brutal death metal riffing ala Aborted and Ingested, but it’s also got the blackened deathcore sound that fits in with Lorna Shore and Angelmaker. It’s crushingly heavy yet teases some of Ricky’s expanded vocal chops via a little bit of singing. Yes, that’s Ricky on the chorus!” 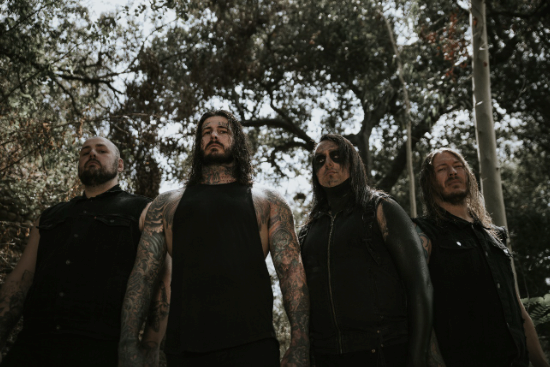 It was a mere two years ago when OV SULFER’s Hoover and Wilson connected via a mutual friend. The former’s tech death desires faded as the group came into its own and began writing. Debut single ‘Behind the Hand of God’ in February 2021 was an unholy warning of what was to come. The front-man’s low-register vocalisations bathed in a firestorm of blackened deathcore and black metal intents, soaring orchestration and unexpected vocal melodies. The response was nothing short of volcanic.

“I had no idea that people would care,” Hoover admits. “Sure enough, I posted nothing more than a logo online and my phone died from all the notifications for two-and-a-half days in a row!” The avalanche of excitement over OV SULFER was shortly satiated with the band’s self-released first EP, 2021s Oblivion, which spelt out the blueprint for the sound of OV SULFER to come. The same day marked a sold-out reckoning moment for the band at Las Vegas’ Freemont Country Club. “They had to move it from the smaller venue next door into the bigger room,” remembers Hoover. “It was an incredible way to come back.”

With a reception warmer than hell and a set of principles to guide them along their left-hand path, it’s unlikely the vocalist will step down from his pulpit any time soon; he has more sermons to preach.