All hail to those good folk at Cherry Red Records who have seen fit to reissue and expand Brit rockers Orange Goblin’s 2007 classic ‘Healing Through Fire’, as any excuse to listen to this album is good with me.

Quite why it’s being reissued now is anyone’s guess. It’s not an anniversary, unless 14th anniversaries are becoming a big deal. It is, however, a loose concept album, dealing, as it does, with the Great Fire of London and, more pertinently, the Plague. So, it’s more relevant now than when it was released, and more timely than it’s been since 1918. Anyways, the ‘why’ isn’t particularly important, let’s get to the ‘how’ and, y’know, the music and stuff.

The album, if you’re a fan, is a no brainer. You’ll have heard it before and will love it. It marks the point where Orange Goblin stopped just being a retro stoner band and branched out. The embraced their metal side with abandon, their doomy biker rock taking on a harder, keener edge, while losing none of their trademark manic bludgeon. It also wasn’t afraid to experiment, adding new (to them) instrumentation and genre splicing.

So, we commence with ‘Ring a Ring ‘o Roses’ being sung mournfully, hauntingly, in the distance before we blast off into ‘The Ballad Of Solomon Eagle’. It’s a joy, the guitars snarl and roar, the riff is a sonic bulldozer of a thing, Ben Ward’s vocals are rowdy and rabble rousing and, just when you think it can’t get any better, it does. As a declaration of intent, it’s pretty dang hard to top.

And on it goes from there, a masterclass in good, old-fashioned, beer-soaked hard rock. The fuzzed, distorted riffage is, as previously mentioned, frequently veering off into the land of full-on metal. There are choice cuts of Motorhead in there, as well as a smidgeon of blooze. Riffs appears, only to be replaced by heavier, harder, faster riffs.

‘Cities of Frost’ recalls ‘Dirt’ era Alice In Chains while ‘Hot Knives And Open Sores’ sounds like a downtuned and slowed down Slayer. ‘Mortlake’ offers brief respite in a folky acoustic instrumental that sounds like it should have been played on a lute while the epic ‘Beginners Guide To Suicide’ is draped in a spacey cloak of bluesy slide guitar and harmonics (courtesy of Johnny Halifax). A great album by a great band. 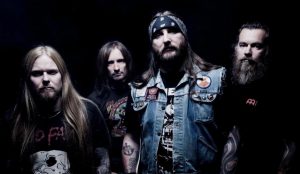 The extras are a mixed bag. We get four tracks from 2007 and The Radio One Rock Show (remember that?) as well as four tracks from a 2006 demo – including a very-nicely-heavy-indeed take on The Damned’s classic ‘New Rose’.

Disc 2 consists of a concert recorded at London’s Mean Fiddler (a much missed venue) from 2006…kind of. This includes a somewhat tinny recording of highlights of the gig which frequently fade away into interviews with the band about their then forthcoming opus. At one point in the recording Ward tells the audience that they’re being recorded for a DVD and it sounds like the contents of said DVD were just recorded onto a CD. It’s ok, but you’re certainly not getting a full gig. So, as previously mentioned, a mixed bag, nicely packaged and presented and weighted in favour of the good stuff. Hey, it’s yer actual Orange Goblin at their best, what’s not to love? 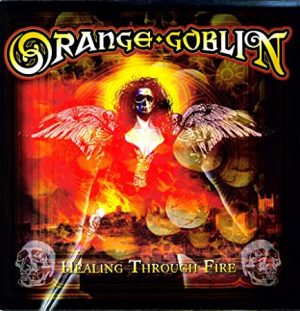