Paul Castles falls under the spell of Sorceress, the new album from Swedish veterans Opeth, released via Nuclear Blast on 30 September 2016

Few bands have generated quite such intense debate as Opeth in recent years. When the Swedes started out their blend of atmospheric gloom flavoured with occasional, but essential, death metal attacks ensured them a following that transcended many genres enabling them to sell out venues from the Royal Albert Hall to Sydney Opera House. The backlash kicked in when they – or to be more defined, the frontman Mikael Åkerfeldt – became increasingly drawn to a more heavily prog influenced sound.

This in turn led to 2012 album Heritage receiving something of a mixed response from their army of fans. What compounded the frustration for many was the band’s steadfast resolve to only play new material live – and the occasional older songs that were filtered into their stage performance also tended to be cut from a cleaner cloth. For some, Opeth without at least occasional Åkerfeldt growls was one unpalatable step too many, even at some gigs resulting in a few vociferous volleys of abuse.

Fortunately Åkerfeldt, who could easily forge a career on the comedy circuit with his acidic wit, is also the master of the quick-witted put-down and so was able to swat any dissenters aside as easily as swatting a fly. The 2014 release Pale Communion saw no hint of a u-turn in the band’s musical journey and so we arrive at this point with the release of the band’s 12th album Sorceress and anyone hoping to see Opeth wind the clock back will again be disappointed. Not that there’s any surprise here as Åkerfeldt has politely but persistently stated that this is where his musical future lies now and anyone holding out for a return to the Candlelight years (first three albums) and subsequent treasures such as Ghost Reveries and Blackwater Park will have about as much success as someone queuing for a bus on Christmas Day. The clean singing melodic approach is evidently here to stay for good and I guess if that means a few disgruntled fans falling by the wayside then so be it.

Sorceress also marks the 25th anniversary of the band and Åkerfeldt has openly discussed how this album was worked on at the time he was separating from his wife, so the heavy introspective sombre sound contained on a number of the tracks is understandably swayed at least in part by the personal problems and charged emotional state he was in during this time of his life.

Opener ‘Persephone’ is a charming cleanly picked guitar piece that would provide the perfect soundtrack for the opening scene of a spaghetti western. But guns back in the holster as a rolling drumbeat and Joakim Svalberg’s Hammond organ accompaniment signal the start of the album’s title track. An engaging extended intro is presented before Åkerfeldt joins in and right from the start his impressive voice adds depth to the track although a slightly stop start section towards the end does seem to distract a little from the general flow of the song. 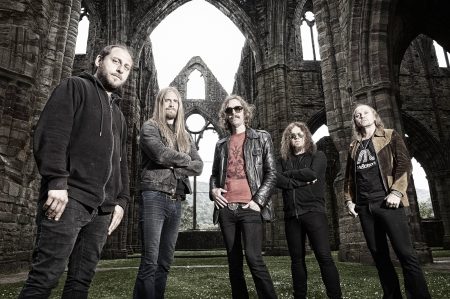 ‘The Wilde Flowers’ has a stomping beat although not an overtly heavy one and things enter an even more headspinning section when an electric keyboard provides a psychedelic flourish. As with so much of the ‘new’ Opeth there’s a lot going on here and first impressions aren’t necessarily the lasting ones. It’s one of the album’s longer tracks and takes on a haunting stillness near the end with Åkerfeldt’s soft delivery sounding as though it’s coming from under the door. ‘Will O The Wisp’ is certainly one of the more heavily textured tracks, Åkerfeldt signing quite beautifully over a softly caressing soundscape with the guitars carving out some memorable melancholic moments, making this certainly one of the more direct tracks on Sorceress and as such one of the easiest to fall under its spell.

On ‘Chrysalis’ Opeth slide effortlessly through the gears making this one of the pacier compositions and possibly one of the few tracks on the album that at the very least carries a few echoes of the band’s past. It’s also notable for a kaleidoscopic 60s colour explosion in which the Swedes somehow shoehorn a plethora of riffs and rhythms into the same converging channel without dropping a stitch.

‘Sorceress 2’ sees Åkerfeldt successfully reach for higher notes than he’s ever managed before while ‘The Seventh Sojourn’ is give or take, the album’s second instrumental piece, a well presented amalgamation of grooves that carries a distinctly eastern vibe.

There’s a lot going on in the sleepy ‘Strange Brew’ that forces you to keep on your toes when trying to keep up. The last full track is ‘Era’ which twinkles along at the start before rearing up into something more substantive, carrying the heaviest beats on the whole album. While an overtly more muscular piece with some meaty riffs thrown into the mix, ultimately Sorceress confirms that Opeth’s allegiance is now nearer Jethro Tull and Led Zepp rather than Morbid Angel.

This is still a fine album, and one that shows Opeth remain a constant light of innovative and challenging music. With the youthful Åkerfeldt at the helm they can look forward to a bright outlook in the next 25 years. 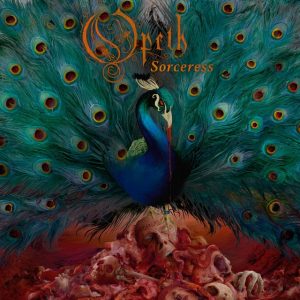