The low murmurings and faint background music were suddenly interrupted by air-raid sirens, which heralded the Onslaught that was about to invade the Academy 3.

Although not a capacity crowd, the Onslaught faithful gave their heroes a rapturous welcome as the guys opened with ‘The Sound of Violence’ and without stopping for further applause, charged straight into ‘Killing Peace’.  Let me tell you that the peace had certainly been breached by the time these thrash metal maestros had steam rollered through ‘Chaos Is King’ and ‘Let There Be Death’!

All the time this seriously kick-ass outfit work the crowd, urging them to “start some action”, with bassist Jeff Williams being particularly persuasive.  As each number was thrashed out you could sense an increasing intensity in the atmosphere, so it was only a matter of time before the inevitable “pit” appeared, parting the sea of bobbing heads, raised fists and the all too apparent \m/.

It was clear that with this being the final leg of their short tour, Onslaught were definitely not holding anything back.  Although quite where the brief interlude which had the band and parts of the crowd discussing the virtues or otherwise of cocoa came from, I’ll never know.  As bizarre as it was, it summed up the infectious good humour and amazing crowd interaction Onslaught bring with them.  It was quite appropriate that this “light” moment was followed by ‘In Search Of Sanity’……t’was time to get back to moshing and all things metal! 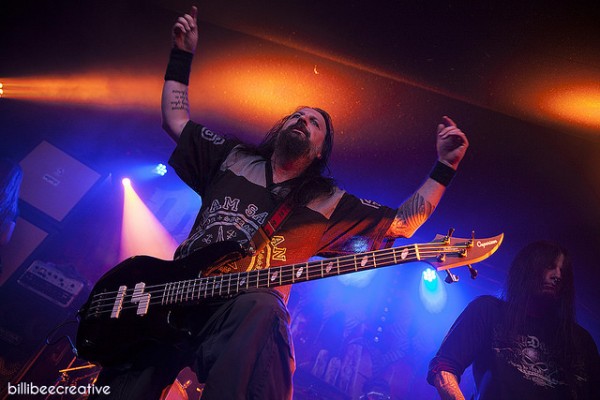 Onslaught brought with them a thirteen song set (two were encores) which proved to me just how good metal can really be.  I’ve never been the biggest thrash metal fan in the world, but much more like this and who knows!

Just a word or two for the lighting and sound guys who sat quietly doing their jobs all night.  Awesome stuff that helped deliver a cracking gig.