In taking the energy of second-generation punk and fusing it to a love of Motörhead it could be argued that Bristol’s Onslaught were one of the very first crossover bands. Like most pioneers they never got due credit yet they carried on regardless, releasing cracking album after cracking album and Generation Antichrist is well equipped to stand astride its illustrious predecessors.

Of course, it wouldn’t be an Onslaught album without the obligatory line-up changes and this time around Dave Garnett has replaced long time vocalist Sy Keeler. It’s sad to see Sy and his unique pitch depart but Dave brings a deathlike growl that’s moving the band in a darker direction and that sonic shift is most evident on succinct opener ‘Rise To Power’. The briefest of introductions gives way to a rhythm section that arrives with the force of a tank division whilst the guitars squeal and light up the sky like warning flares. But that’s just a precursor to ‘Strike Hard Strike Fast’, a track that explodes into life with an artillery barrage of blitzkrieg guitars. Recalling the glory days of thrash, it’s an all-out sonic assault that goes straight for the throat and then refuses to let go.

The spaces between tracks are kept to an absolute minimum which only adds to the overall feeling of intensity as the political treatise ‘Bow Down To The Clowns’ follows and the street level lyrics inject a realism that make a nice change from the usual nuclear war/demonic lyrical fare. Totally worthy of being the title track ‘Generation Antichrist’ is sure to transfer well to the live environment and you can almost see the mosh pits, wall of death and fists pumping as the crowd sing along to the insanely catchy “Generation Antichrist!”. Barely pausing for breath ‘All Seeing Eye’ features a staccato riff, like broken Morse Code, alongside a blistering, whiplash inducing guitar solo that’s played so fast it appears to be going backwards.

James Perry takes his drums off the Richter scale on the wonderfully titled ‘Addicted To The Smell Of Death’ as Onslaught capture the energy of the UK82 punk scene and weld it to a thrash metal sensibility. Founding guitarist Nige Rockett and newbie Wayne Dorman evidence an undeniable chemistry and fire off each other with solos entwining the riffs which ensures that ‘Empires Fall’ effortlessly ululates. The blasphemous ‘Religiousuicide’ is an intricate maze that makes the listener giddy within its dizzying musicianship and finds vocalist Dave spitting his words with venom and fortitude. ‘A Perfect Day To Die’ was originally unleashed last year in tribute to the fallen heroes of Motörhead and, as such, is the perfect closer. Long term bassist Jeff Williams kicks things off with a classic d-beat rumble as the band raucously repay a few roots with a song that races to a frantic conclusion.

Amazingly Onslaught are rapidly closing in on their 40th anniversary and, with no signs of slowing down, they’ve finally come of age with their latest album…welcome to Generation Antichrist. 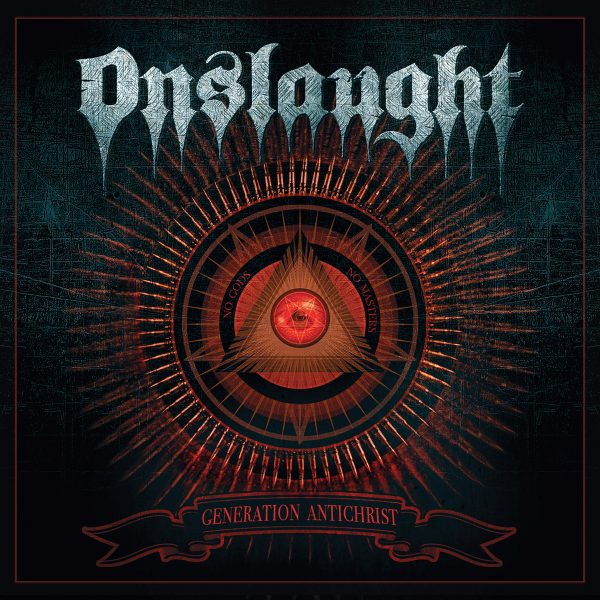