Finnish band One Desire’s first live album, One Night Only, is a record of a one-off show the band played in October 2020, having not had the chance to play any shows since their second album, Midnight Empire, was released. With the pandemic still in full swing, it wasn’t possible to play a proper show, and there was only a small audience present, but the band were keen to see how their new songs worked live and arranged this show at the On The Rocks Club in Helsinki, although in the end the set was split 50/50 between songs from the new record and the debut, with the early part of the show weighted in favour of Midnight Empire, before rounding off the set with some of the more well known songs from One Desire, including the successful single ‘Hurt’.

The band had been off the road for over six months before this show, and were probably a little fired up, understandably, which may explain why it sounds as if they came in a little early, playing over the end of their intro tape, but opener ‘Shadowman’ sounds terrific, as does ‘Apologize’. ‘Down and Dirty’ isn’t quite so good, sounding as if it runs out of steam near the end. There are three ballads across the middle of the set, ‘This Is Where The Heartache Begins’, ‘Only When I Breathe’, although that’s just an extract less than two minutes long, which leads into ‘Falling Apart’, one of the big songs from the debut album, and which absolutely begs to have hands, lighters and phone lights held aloft.

This trio of ballads does break up the momentum of the set to an extent, especially after ‘Godsent Extasy’, which fairly bounces along, but after the slower songs comes ‘After You’re Gone’, a great song, as good as any AOR song of the last few years. The last three songs are from the debut, including ‘Hurt’, another song with a great chorus that just bowls along, finishing up with ‘Buried Alive’, which starts off like a Nightwish song, and includes a false ending before the song ‘Battlefield of Love’, which isn’t listed in any of the previews.

One thing I’d like to mention is that the band are using a live keyboard player, who isn’t listed as a permanent member of the band, although for this show he’s almost off the stage due to its limited dimensions, and I can’t find any name for him in any of the publicity, which is a shame, because he does a fine job, on the album, and he adds a lot to the overall sound. But then the whole band are clearly thrilled to be playing to an audience again, and that helps to make the album such an enjoyable listen. It also sounds live, with no obvious post recording studio tweaking, which is another thing to like about One Night Only.

Considering it was recorded and filmed in a comparatively small venue, with a correspondingly scaled down production, the DVD version of the show looks to be a well filmed and enjoyable package, although at the time of reviewing there were only extracts available on Youtube. The crowd, described as ‘minimal’ in the press release, nevertheless make a decent amount of noise, and that, and the band’s obvious pleasure in playing again, help to give the set a good atmosphere. The album is available in three formats, a CD/DVD release, a Blu-Ray and a double vinyl package and if you’re not familiar with One Desire’s brand of melodic hard rock, this is a good introduction to the band. 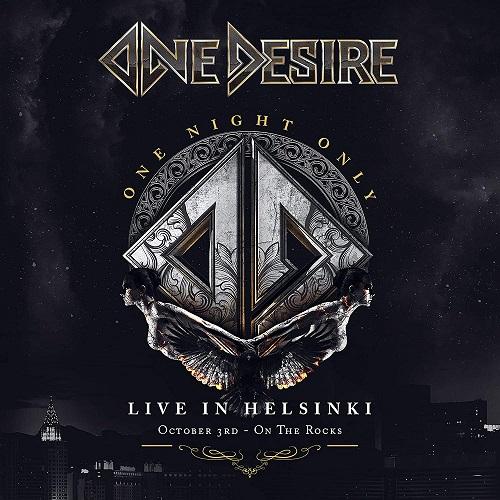