The folk at Cherry Red records have put together a sumptuous collection of songs celebrating the brum rock scene of, you’ve guessed it, 1966 to 1974. The collection of 69 tracks span 3 CD’s housed in a clamshell box along with a 48 page booklet that includes a short essay on the Midlands music scene by David Wells along with photos and details of each track.

Licensing costs have clearly dictated the exclusion of some of the bigger players, but that doesn’t really detract from the appeal of this package. Even the more well known bands that are represented here are done so with more obscure tracks. Slade, for example, appear with ‘One Way Hotel’ taken from 1970’s Play It Loud which has Noddy in fine voice as the band are finding their unique sound. Even more interestingly is the inclusion of ‘Security’ which see the same band, then known as The ‘N Betweens, covering the Otis Redding song four years earlier which must have been one of their earliest recordings. Why this gem was used on Slade’s own box set is anyone’s guess.

Mick Ralphs (Mott The Hoople / Bad Company) turns up with Overend Watts with an early recording of ‘Rescue Me’ from The Doc Thomas Group. Recorded in 1967 with original Mott vocalist Stan Tippins the cover proves a wonderful insight into what the band was like before it evolved into Mott The Hoople. Roy Wood crops up several times throughout. He can be heard first on The Move’s second single ‘I Can Hear The Grass Grow’. Meanwhile Magnum fans will be delighted to get the chance to hear Bob Catley singing ‘On Time’ for his first recording in 1967 with The Capitol Systems; a 1960’s song very much of its time. This and the later featured Paradox song ‘Goodbye Mary’ being far removed from the band he would make his name with.

Steve Winwood sounds as good ever on Traffic‘s ‘No Face, No Name, No Number’ while his old group The Spencer Davis Group are featured with replacement Eddie Hardin singing on the 1968 single ‘Moonshine’. Before she went on to find even greater worldwide fame in Fleetwood Mac, Christine Perfect delivers a wonderfully bluesy ‘When The Train Comes Back’ taken from Chicken Shack‘s 40 Blue Fingers LP. Velvett Fogg, famous for having Tony Iommi as a brief alumni before forming Earth delve into psychedelic blues with ‘Yellow Cave Woman’. The Ace Kefford Stand sees a young Cozy Powell providing the beat to Sharon Tandy cover ‘Daughter Of The Sun’. Featuring some excellent guitar from Dave Ball, it’s a harder offering with a Spooky Tooth feel to the track.

Jardine’s ‘Masochists Of Strangulation’ is an interesting slice of dark psychedelic rock. Recorded in 1969 for an unreleased album one can only imagine where a band like this might have led if it had taken off at the time. Before Trapeze developed into the hard rock sound of Medusa and You Are The Music that saw the members being poached by Deep Purple, Whitesnake & Judas Priest their first album was more flower power influenced. By far the heaviest and most progressive track from this album, ‘Suicide’, featured here gives an indication of what was to come. Big Bertha‘s take on the Zombie’s ‘Time Of The Season’ is a decidedly heavier affair in a five minute previously unreleased version with Cozy Powell on drums and featuring another cracking solo from guitarist Dave Ball. Steve Gibbons, who turned 80 this year, still gigs throughout the Midlands. Here you can hear ‘Brown Girl’ taken from his 1971 album Short Stories with the supergroup line up of Albert Lee, Humble Pie’s Greg Ridley and Spooky Tooth’s Gary Wright.

The box set concludes with three of the heavier tracks courtesy of Bedlam, Judas Priest and Blackfoot Sue that give a hint of the style of music that would put Birmingham on the map for 1970s. Maybe we’ll see another set covering this period in the future.

The fact that many of those featured on this collection are still touring playing either arenas all over the world or the smaller confines of the West Midlands pub circuit is testament to the immense talent that this small spot on the planet has given birth to. The influence of this generation upon music is unfathomable.

For anyone strapped for ideas for the music lover for Christmas, this curated box set would make an ideal present. The appeal going far beyond those in the Midlands due to the global nature of many of the artists and also due to the fact that while you may be fans of certain bands it’s likely that you’ll find something you’ve not necessarily encountered before. 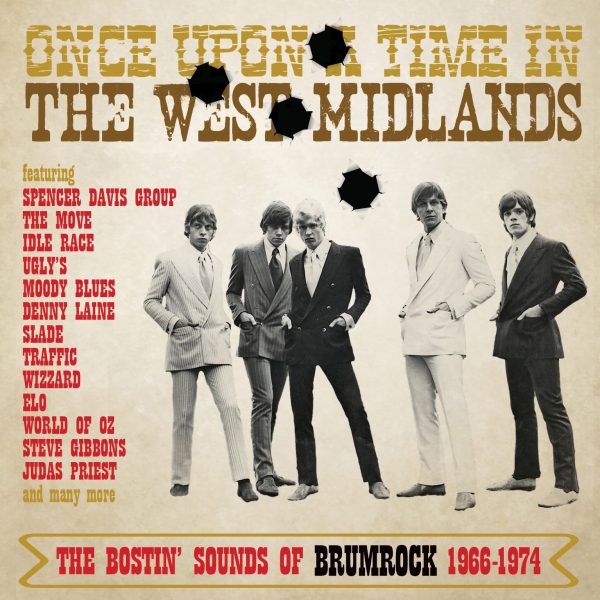