By 1980 the nihilism of punk had reached its logical conclusion. The Sex Pistols had imploded while the Clash, despite professing to be ‘So Bored With The U.S.A.’, had travelled to the States to conquer their stadia. Back in Britain the youth were naturally peeved and a new breed of bands formed as a reaction to the commercialisation of punk. This new wave stripped punk bare and played it harder and this mutation was christened ‘Oi!’ by Sounds journalist Garry Bushell. He also assembled these compilations and, as evidence of unadulterated punk rock, they still hold up very well 40 years later.

Released at the dawn of a new decade Oi! The Album opens with the Cockney Rejects’ statement of intent ‘Oi! Oi! Oi!’. A furnace blast of punk energy that’s loaded with melody, it’s an uplifting anthem that sets the tone for the rest of the album. Peter & The Test Tube Babies add a touch of brevity with ‘Rob A Bank (Wanna)’ before the 4-Skins arrive like a shiny Dr Marten to deliver the urban nightmare that is ‘Wonderful World’. Scottish hooligans The Exploited encapsulate all that’s great about Oi! on ‘Daily News’ with its terrace chant chorus and discordant guitars.

In 1980 bona fide Oi! bands were thin on the ground so more established acts like Cock Sparrer and Slaughter & The Dogs were pulled into its orbit. The former would be forever associated with Oi! while the latter’s ‘Where Have All The Boot Boys Gone?’ (originally released in 1977) certainly fitted the bill. The Terrible Twins (featuring the Rejects) and Barney & The Rubbles (4-Skins) were studio bands inserted to pack the track listing but both show a great deal of promise and it’s a shame they weren’t developed further.

The po-faced Stuart Marconie once labelled Oi! as “Punk’s stunted idiot half brother…” but the Angelic Upstarts raise two fingers to that suggestion (mimicking the cover) to deliver the thought provoking ‘Guns For The Afghan Rebels’ along with ‘Last Night Another Soldier’. If that sounds a bit too heavy then the Postmen deconstruct Pink Floyd’s ‘Have A Cigar’ and Max Splodge raises a few smiles with ‘Isubeleeeene’. It’s that mixture of humour and heavy lyricism that echoes throughout these compilations and it’s what makes Oi! The Album such an enjoyable listen.

In early 1981 Oi! seemed an unstoppable force and Strength Thru Oi!, released in May that year, seemed destined to continue the upward trajectory. It’s title attracted criticism for (unwittingly) alluding to the Nazi leisure organisation while the cover (again unwittingly) featured a rather unsavoury character. Both of these faux pas went largely unnoticed until the 4th July 1981. An Oi! gig at The Hambrough Tavern on that evening was firebombed and the surrounding streets of Southall erupted into riotous chaos.

Strength Thru Oi! was the first album to introduce “street poetry” and the three monologues from Garry Johnson add a touch of gritty realism and intersperse classic tunes from the 4-Skins (‘1984’), The Last Resort (‘Working Class Kids’) and Cock Sparrer (‘Running Riot’). The humour this time was provided by Splodge with ‘We’re Pathetique’ and The Toy Dolls’ ‘Deidre’s A Slag’.

Released a few months after Strength Thru Oi! on indie label Secret Records Carry on Oi! sought to soften Oi!’s aesthetic. Its title was a play on the Carry On film franchise while the record was housed in a sleeve that parodied those saucy seaside postcards. Reaching a respectable number 60 in the National Charts Carry On Oi! was the most commercially successful album in the series and arguably its musical pinnacle.

With the Cockney Rejects and Angelic Upstarts moving on to new musical pastures Carry On Oi! ushered in a new breed of bands which were more varied than those found on Strength Thru Oi!. The Business played a kind of pop-Oi! and, like an updated version of Slade, played an aggro rock that was liberally soaked in melody. Blitz reworked (and vastly improved) two tracks from their debut album, Wales’ The Partisans show a great deal of promise and Red Alert launch a damning indictment on the police with ‘SPG’.

The old school are represented by Infa Riot and the 4-Skins who send themselves up with ‘Evil’ while the brevity comes from Peter & The Test Tube Babies and The Gonads. The whole album was dedicated to the spirit of Sid James and Che Guevara and while an Oi! Compilation would never trouble the charts again this third edition was a fine way to bow out.

Again released on Secret Records Oi! Oi! That’s Yer Lot! hit the streets in 1982. Carrying on in the spirit of its predecessor it took its title from comedian Jimmy Wheeler’s catchphrase and the original vinyl contained a ‘Punk’ and a ‘Drunk’ side. By the time this instalment arrived the old school had been swept away making way for new blood like The Oppressed, Attax and Sub-Culture and although it’s not quite up to the standard of Carry On Oi! it nevertheless drips with proletarian rage.

The ‘Drunk’ side is well worth a listen (especially with a bottle of something) and further positioned Oi! away from its tarring by the Daily Mail. Like a one man Chas & Dave Frankie Flame serves up a lively ‘On Yer Bike’ and the king of rudeness Judge Dread is at this double entendre loaded best with ‘The Belle Of Snodland Town’. Attila The Stockbroker is poet this time around with ‘Away Day’ as Coming Blood closed the original album in fine style with ‘Such Fun’.

Oi! Oi! That’s Yer Lot! originally featured Black Flag’s ‘Revenge’ which isn’t featured here due to licensing issues which is a shame as it positioned Oi! as the missing link between punk and American hardcore. However, this disc includes the Back On The Streets EP as a bonus which features tracks from Venom, The Strike, East End Badoes, Skin Disease and the wonderfully named Angela Rippon’s Bum.

Like the first Oi! compilation the last two albums in the series feature a plethora of studio bands, but this time for different reasons. Following the Southall riot Oi! had been completely stifled by the mainstream media and there was a distinct lack of new talent, hence the return of the 4-Skins, Cock Sparrer, The Business and the Angelic Upstarts. All of these groups make a solid contribution but it’s the studio bands who let the album down by seeming rushed and frivolous.

Continuing the series of pun filled titles Son Of Oi! saw the light of day on Syndicate Records in 1983 and found the street poetry replaced by political rants. The spoken word takes up a fifth of the album and it’s another reason while Son Of Oi! feels a tad disjointed. However, there’s flashes of brilliance like Kraut’s ‘Onwards’ (representing NYC with the Pistols Steve Jones on guitar) and also the collaboration between Attila and the Newtown Neurotics. Son Of Oi! didn’t quite capture the magic of its predecessors but it’s worth a listen nonetheless.

The Oi! Of Sex

Quite fittingly this original sextet of albums came to an end in the Orwellian year of 1984. In retrospect they were right to end the series here and the fact that The Oi! Of Sex failed to even dent the indie charts was indicative that time was up. Cock Sparrer made a welcome appearance but even their ‘The Sun Says’ was sounding a touch staid. The studio bands were stretching the joke a bit too far and without a spoken word from Garry Johnson even that department was getting threadbare.

That’s not to say The Oi! Of Sex is a bad album, far from it. The new bands included keep the flame burning with The Burial delivering two track’s of fine Oi!/ska fusion along with Vicious Rumours who also deal a fine double punch. The Gonads finally got it right with ‘S.E.7 Dole Day’ (a reworking of The Monkees ‘Pleasant Valley Sunday’) but, perhaps attesting to the lack of quality control the slightly dodgy ABH make an appearance (the first band of dubious political leanings to feature) meaning this one’s for completists.

In a music industry that often flirted with fascism it seems the genre of Oi! has been unfairly tarnished. While Siouxsie Sioux and Sid Vicious wore swastika arm bands and t-shirts and Joy Division named themselves after the Freudenabteilung (concentration camp brothels) you’ll find no nefarious political leanings here only six albums full of the very best streetpunk. And if you want to know from where Rancid and the Dropkick Murphys derived their raucous sound it all began right here… 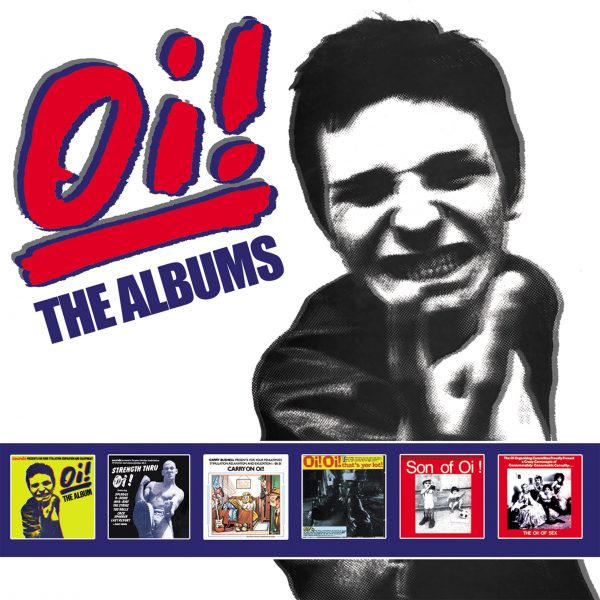