Having released their second full length album earlier this year in the shape of Flip Phone Fantasy Australia’s Ocean Groove have been ringing in the changes for this record. Dale Tanner swapped the bass for the mic stand while new guy Twiggy Hunter now thumps the four string and adds his deft tones to the vocal department.

Having toured the UK earlier this year supporting Japanese band Crossfaith, Ocean Grove wooed audiences with their unique sound so Peter Dennis decided it was high time to catch up with Dale and Twiggy.

Can you give me a brief history of the band?

Dale: The band has been together for almost 10 years now. We started back in high school in Victoria, Australia, we were all friends and for the first few years we were mucking around and sharing a passion for music. We only started getting serious from 2013 onwards, we put out a couple of EP’s, started to tour Australia and once we got a bit of momentum behind us we put out our first album called The Rhapsody Tapes. After that we did some international touring: America, Japan and Europe twice. We had a line up change in 2018 when our vocalist and our guitarist departed so we brought Twiggy in on bass and I stepped up as singer.

How was it swapping bass for the mic stand?

Dale: I found it quite natural to be honest. I feel deep down I was meant to do it rather than being a bassist or guitarist. Any time at home and in any scenario I’d be singing and from the age I could talk I’d be singing along with the radio so it was engrossed within me and from the very first gig we did as the new line up I felt like a tiger let out of a cage. It felt right.

Twiggy, do you feel your joining the band has altered the chemistry?

Twiggy: When I came into the band, we discussed a shared vocal method, the same way Alice in Chains kind of do their thing. A few songs on the album Dale and I share vocals and in the live environment Dale will step back and I’ll grab the mic which is good. There’s a great vocal dynamic between us which is really good. Dale’s got a very deep, cavernous voice while I’ve got a higher, more of a whining vocal so they go hand in hand and the harmonies on the album sound very slick.

Although the world is getting smaller Australia is still isolated with the music industry based in the Northern hemisphere. Did this help you create a unique sound?

Dale: Yes, in a way. We have a pretty unique music scene in Australia and I think there is some magic in being isolated and not having that external noise influencing what you’re doing. For us I think we’ve taken it one step further by not paying attention to what’s happening within Australia. We shut the curtains and locked ourselves away, we knew what we wanted to do with this album regardless with what was happening in the outside world. We were talking about a band called The Chaps who’ve got a really Australian sound yet it’s transferred so well to the other side of the globe.

It seems that Australia has a thriving musical scene.

Dale: For sure, especially in the last five years I’d say there’s been a real spike in great bands. You often read online people saying their favourite bands come from Australia. It seems the world is starting to plug in now and it feels great to be part of that.

Did your immediate environment shape your sound at all?

Twiggy: I think a lot of our sound is based on life experiences. We’ve got four big personalities in the band so I’d say our most natural state is when we’re in the studio. I think creating something new is just ingrained with us so we just like to write good songs.

Dale: I would say that we all grew up in areas that were a bit rough and when you combine that with an Australia that’s either stereotyped as being laid back or having a lot of energy I think we’ve taken that energy and infused that into our music and the punk and rough element we inject into it comes from growing up in a community where you have to look after yourself and you have to be street smart.

Twiggy: We got beaten and bruised and our world was shaped for us, until we could shape it ourselves.

Growing up and belonging to any subculture can be a rough ride.

Twiggy: Music was always there and it was the one fall back for whatever I was going through. It was like a safety net and it’s the reason we’re here right now, we haven’t given up on that and it makes sense to pursue it. 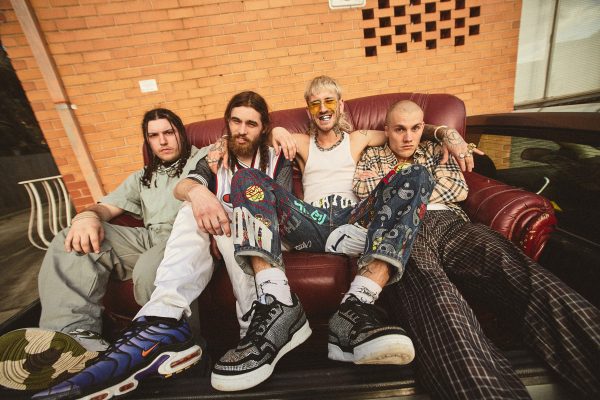 Who are your musical influences?

Twiggy: We definitely listen to a huge and varied range, Kate Bush, Kid Rock, a lot of new metal bands like Behemoth, while Sam [Bassal, drums] is into stuff like Gorillaz. It’s a mixed bag and we try to emulate that in our sound. We’re trying to shove down people’s throats that that’s where the future is.

Dale: We had a discussion a few years ago as to whether the term ‘genre’ was dead with the mixing and matching of sounds. It’s kind of interesting that things are moving that way so we’re trying to ride that wave and see what happens.

How do you find touring the UK?

Dale: We’ve toured the UK twice before. Both times were quite short but I think there’s a definite connection. Both times we headlined small clubs and they were all sold out and that’s sent us home itching to reconnect. Now the albums come out we can’t wait to come back again. There’s loads of great bands that come from the UK so it only seems natural that it should feed back into our music.

There seems to be a plethora of angry bands around. Do you think it’s a case of art imitating life?

Twiggy: Music is definitely cathartic and a lot of our life experiences bleed through into our lyrics and melodies and the angst that comes through in our music, it breaks through the wall to expose what’s on the other side. I’m just a big ball of anger. As John Lydon said: ”Anger is an Energy” and it’s best to embrace it and it when it comes just run with it.

Dale: Which is cool because a two-minute song where there’s no pause or respite, it’s just start and finish: that’s the best way to represent what we feel.

What can fans expect from you in the coming year?

Dale: We’d love to get over to the UK for a headline run to play the new album live and showcase our new sound. They can expect a lot of energy and a lot of fun with a few surprises here and there.