Metal lost perhaps it’s finest drummer on Monday when the death of ex-Slipknot skinsman Joey Jordison was announced. According to a post by his family, Jordison passed away “peacefully in his sleep” although no cause of death has been given.

Jordison, despite having played with numerous bands, will always be best known for his work in Slipknot. Jordison was one of the founders of the band in 1995 and was also responsible for many of their early hits. Slipknot were an assault, a shock to the senses. Stunningly aggressive and looking completely unique (and pretty damn terrifying) – they turned metal on it’s head, injecting mystery and rollercoaster thrills back into the genre. Much of that was down to Jordison, his playing a mixture of fury, breathtaking technical prowess and edge-of-chaos emotion.

Jordison left the band in 2013 in somewhat mysterious circumstances – did he jump or was he pushed? It only came to light some time later that he had been suffering from transverse myelitits, a form of multiple sclerosis.

Jordison also played guitar in Murderdolls and played in several other notable bands, from Rob Zombie to Ministry. He also famously stood in for Lars Ulrich for Metallica’s infamous 2004 Download headline set. The metal world came together as one in their praise for Jordison. Frank Turner perhaps summed up everyone’s feelings best – “46 is no age…”. Each member of Slipknot has a number. Jordison is #1. 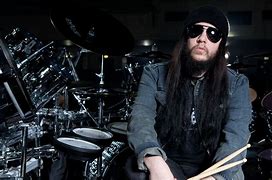