Hill was one third of the longest running unchanged line-up in rock. Formed in 1969, they are still going strong, having released 15 albums, shifted mega-units and rocked pretty much every roadhouse, outhouse and stadium the world over.

Hill’s death was announced in a group statement last night on Instagram: “We are saddened by the news today that our Compadre, Dusty Hill, has passed away in his sleep at home in Houston, TX”. Tributes began pouring in instantly from every corner of the rock community, from John Fogerty (who had played with him just last week) to Warren Haynes to Flea, and everyone in-between.

ZZ Top were a genuine phenomenon. A little ‘ole blues band from Texas whose almost cartoon-style imagery and willingness to move with the times made them unlikely MTV icons. Holding it all together were Hill’s in-the-pocket, steadfast basslines. As Frank & Billy said last night, “we will forever be connected to that ‘Blues Shuffle in C”.

It has also been announced today that, as per Hill’s wishes, ZZ Top will continue with the bands longtime guitar tech, Elwood Francis, taking over bass duties. Francis made his stage debut last Friday, filling in for Hill who had dropped out of their current tour due to a hip injury. 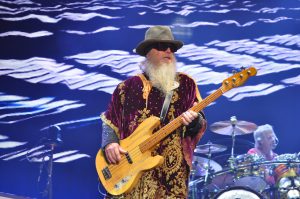