Perhaps no other moment in rock has been as significant as that which spawned the New Wave Of British Heavy Metal. By the late 70’s Purple, Sabbath and Zeppelin were floundering while punk had KO’d the likes of Yes, Uriah Heep and Hawkwind. Into this void stepped a bunch of young guitar wielding herberts who fused punk’s energy and DIY ethos to metal musicianship and gave the scene a much needed adrenaline injection. 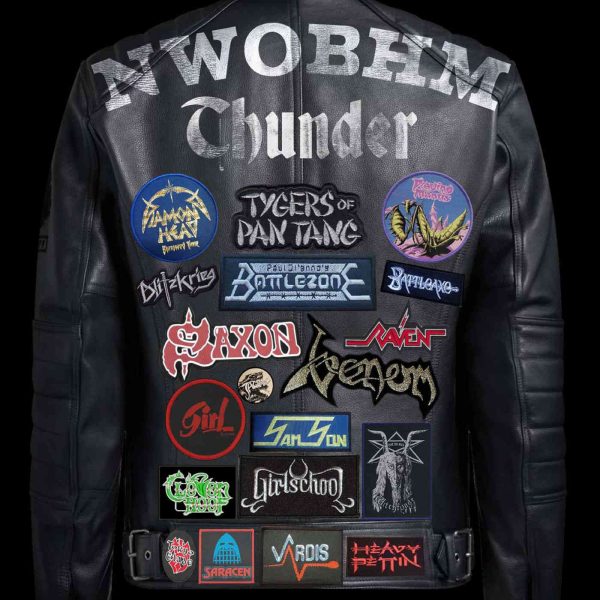 The cloudburst that is Saxon’s ‘Heavy Metal Thunder’ opens this collection and there’s no better way to begin than with this fully fledged, flag waving anthem. Barnsley’s best later lost direction and veered into glam territory but in 1980 they could do no wrong and released two albums that year (Wheels of Steel and Strong Arm of the Law) which were pivotal to the scene. Unfairly viewed as a ‘boys club’ the NWOBHM nevertheless opened doors for women in metal and South London’s Rock Goddess arrived like a trio of avenging harridans and the scything ‘Satisfied Then Crucified’ put most of the menfolk to shame. The riff heavy ‘You Got Me Running’ finds the Pauline Gillan Band exploding with effervescence to deliver a well-crafted tune before Praying Mantis encapsulate all that was great about the scene as ‘Flirting With Suicide’ is at once ominously heavy and melodic.

This is a well put together compilation and the running order is spot on ensuring the discs ebb and flow perfectly and with just one track from each artist it evidences just what a diverse scene the NWOBHM was. Aragon put their own stamp on Golden Earring’s ‘Radar Love’ (and vastly improve it) before Elixir open up a chaotic ‘Pandora’s Box’. Of course, with so many great bands vying for attention some great acts got lost in the shuffle and one act who always deserved more credit are Cloven Hoof. A satanic ‘The Gates Of Gehenna’ is a riotous cornucopia of powerhouse drumming and blistering guitar solos. The modestly titled Paul Di’anno’s Battlezone finds the ex-Iron Maiden warbler on fine form as the band unleash ‘The Land God Gave To Cain’, an epic song of biblical proportions.

Think a more melodic Girlschool and you’d have something approaching the excellent Siege and ‘Goddess Of Fire’ is a contribution which leaves a trail of scorched earth between your speakers. Beginning their career with the aptly titled live album 100mph Vardis are represented here with 1982’s short, sharp shock ‘Too Many People’. Battleaxe were a band very much in the vein of early Saxon and the buffalo stampede that is ‘Burn It Down’ could quite easily swing with Motörhead. The inimitable Venom are represented with the flip side of their debut single and ‘Live Like An Angel, Die Like A Devil’ is heavy on the distortion pedal and, even at this early stage, it’s easy to see why they were a big influence on the Norwegian black metal scene. Making good use of the Devil’s tritone War Machine close the disc with the doomy ‘Power’ which features the glass shattering vocals of Bernadette Mooney.

While the NWOBHM movement certainly drew on the energy and do-it-yourself aspect of punk there was none of that ‘kill your idols’ nonsense as metalheads always had a healthy respect for their forbearers. Case in point being Blitzkrieg’s ‘Inferno’ which unashamedly amps up Focus’ ‘Hocus Pocus’ to the maximum while Mantas deliver a dramatic rendition of Fleetwood Mac’s supremely devilish ‘The Green Manalishi’. Taking their melodic cues from Thin Lizzy, Birmingham’s very own Dark Star saw some chart action with ‘Lady Of Mars’ and that middle-of-the-road vibe continues with Midas’ b-side to their only slab of wax, ‘Power In The Sky’. I’m picking up a definite Demon vibe on Chevy’s ‘Just Another Day’ before Black Rose let fly with the racy ‘Ridin’ Higher’.

Some have derided the NWOBHM scene as being parochial yet, despite many of these bands coming from the same localities, they each bring something fresh to the table and whilst spinning this second disc you’ll marvel at the sheer variety on offer. From the high octane blues of Hammerhead’s ‘Time Will Tell’ to the metallic stomp of Metal Mirror’s ‘Crazy’ there’s an undeniable energy that unifies the disparate sounds. The mysterious Liaison deliver a whimsical ‘Only Heaven Knows’ while Bristol’s Shiva follow and effectively mix up rhythms on a demo version of ‘En Cachent’. Girl were a supergroup in reverse (members went on to join LA Guns and Def Leppard) and ‘Hollywood Tease’ from the Sheer Greed album shows why they were such a hot ticket.

Saracen display their epic leanings on ‘A Face In The Crowd’ while Tygers Of Pan Tang vastly improve The Clovers ‘Love Potion No 9’. Along with Diamond Head the Tygers should have entered metals premier league and, armed with a major label contract, it shall forever remain a mystery why they didn’t break out of the pack. ‘Love Potion’ does have a slight novelty feel, a last roll of the dice for some Top 40 action but, unfortunately, it didn’t work and they lost their deal with MCA. From their 1980 demo Demon Pact deliver the proto-thrash of ‘Demon Pact’ as Chrome Molly round the disc out with a nice and twiddly cover of Gary Moore’s ‘Nuclear Attack’.

Of course it’s not only bands who define a scene but record labels too. All helping shape the nascent scene were Ebony, Rondelet, Heavy Metal Records and, forever associated with NWOBHM, Neat Records. Based in the North East they released seminal records by White Spirit, Blitzkrieg, Persian Risk and, opening Disc 3, Raven. From their 1983 album All For One ‘Break The Chain’ shows why they were such a big influence on the Big Four and features some fine screaming from Accept’s Udo Dirkschneider. Their move to America and major deal with Atlantic didn’t bode too well but they’re immortalised here in all their ‘athletic rock’ glory. Another band who chased the American dream were Scotland’s Heavy Pettin’ and, even though that dream watered down their sound, an early rendition of ‘Love Times Love’ points to the magic of their debut album Lettin’ Loose.

Jaguar show their more melodic side with ‘Another Lost Weekend’ before Samson introduce the fine pipes of Bruce Dickinson on ‘Earth Mother’. It’s a shame they never regained their former glory when Bruce jumped ship for the Maiden gig because ‘Earth Mother’ displays a lot of potential. Signed to Clay Records Demon were something of an anomaly on a label more known for the punk of Discharge but ‘Liar’ is laden with AOR leanings. ‘It Could Be Better’ finds Girlschool morphing from pub rockers into fully fledged metal heroines while Tokyo Blade arrive fully formed with the anthemic ‘Dirty Faced Angels’.

Stormtrooper sound futuristic with spacious keys opening ‘Still Comin’ Home’ while the aptly titled Savage beat the listener with a monstrous riff on Stevie’s Vengeance’. It’s noteworthy that Metallica covered Savage’s ‘Let It Loose’ on their Hit The Lights demo and the influence of the NWOBHM on the fledgling San Francisco thrash scene is further hammered home by Diamond Head and their unique ‘In The Heat Of The Night’. Closing the set is Newcastle’s Fist (another band on the Neat label) and their epic ‘Lost And Found’ (from ‘82s Back With A Vengeance) ensures things end on an ethereal, yet heavy note.

NWOBHM THUNDER makes a fine companion piece to 2018s NWOBHM: Winds Of Time (also released via Cherry Red) but this latest set digs even deeper into the vaults to give a splendid overview of a much maligned movement. Whether you want to explore the roots of thrash or just rock out with some of the best metal on offer there’s no better place to start than NWOBHM THUNDER: The New Wave Of British Heavy Metal 1978-1986.