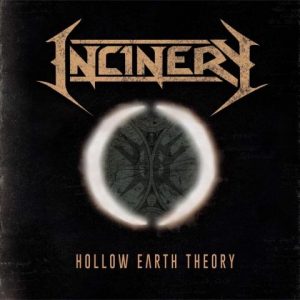 The album showcases the most refined example to date of the band’s trademark blend of 80s thrash and modern brutality. Drawing inspiration from a bleak mix of occultism, conspiracy theory and science fiction, Hollow Earth Theory delivers a whiplash nightmare tour of the titular hollow earth.

This is a riff maelstrom by way of alien abduction, the novella of Harlon Ellison, alchemist Nicholas Flamel and existential cosmic annihilation. Stalwarts of the UK thrash underground, Incinery have shared the stage with legends of the genre such as Exodus, Hirax, Lawnmower Deth and Savage Messiah. They have also appeared at major festivals across the UK and Europe including Bloodstock, Download, Damnation’s ‘Night of Salvation’, Hard Rock Hell, Hammerfest and Metal Days (Slovenia) among many others.

Hollow Earth Theory was recorded and mixed by Chris Kenny, the band’s guitarist. The drums were recorded and produced by Sam Bloor of Lower Lane Studios and the album was mixed and mastered by Peter Dowsett at RYP Recordings, Lecturer at Abbey Road Studios. The artwork was created by Dan Layton Graphic Design & Illustration.

This has everything you want from a thrash metal album. It has a huge wall of sound smashing your eardrums, anthemic melodies you will be chanting for years and the sheer brutality that will keeping heads banging.

Incinery said: “It’s very exciting for us to get Hollow Earth Theory out there. This is material we’ve been working on for a few years now and it’s definitely all the better for having had the time spent on it. We’re in the fortunate position that guitarist Kenny is a great sound engineer and that’s allowed us to create the exact sound we wanted for the album. We’re all very proud of the end result and feel it’s the best representation of our style to date.”

Pre-orders for Hollow Earth Theory will go live this Friday (18 September) via Bandcamp https://incinery.bandcamp.com/merch, digital pre-orders will also be available from Tuesday through Apple Music, Amazon Music and more.