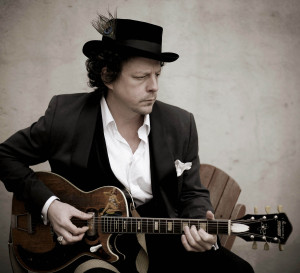 It might be the end of the summer, but to help you beat those September blues we have loads of, erm, blues to keep you rollin’ and tumblin’ with the latest instalment of Nothin’ But The Blues, Midlands Rocks’ monthly blues news round-up.

Making the biggest in blues news recently were this year’s British Blues Awards at the end of August, which saw a wide variety of performers given accolades for their talents. The talented Ian Siegal had his arms full by the end of the night, taking home awards for the categories of British Male Vocalist of the Year, Songwriter of the Year and Album of the Year, the latter for his latest record, Candy Store Kid. Two awards, for British Female Vocalist and British Blues Guitarist, went to blues-rocker Chantel McGregor, who picks up the vocalist trophy for the second year running. Marcus Bonfanti further confirmed his rise in the blues world by taking the title of British Acoustic Act of the Year, while in a freak tie ‘Blues Boy’ Dan Owen and acoustic singer-songwriter Lucy Zirins both picked up an award for British Young Artist. You can find out all the winners and runners up by visiting the awards website, but for now, here’s a video of triple-winner Ian Siegal:

Before we get to September’s new releases, there was one that dropped in August that’s definitely worth checking out: Lickety Split by Robert Randolph & The Family Band. With his latest release, the pedal steel-playing Jersey boy and his phenomenal backing band (accompanied on two tracks by Carlos Santana) has produced one of the freshest and liveliest albums of the year, seamlessly and energetically globetrotting across genres to create a danceable blues/funk/soul/rock/disco collection.

And so to September: a little thin on the ground, though taking most of that earth is power trio Geezer’s debut release, Electrically Recorded Handmade Heavy Blues. Swinging, monstrous bass, raucous harmonica, crunchy guitars and a true growler in Pat Harrington, the New York three piece’s first outing, which comes out September 10th, sounds like it’ll be turning some heads — get yours nodding to the opener, ‘Planes, Trains and Automobiles’, below.

In the world of reissues, this month Muddy Waters’ 1974 album Unk In Funk gets another release via Traffic Entertainment, and the celebrated but relatively unknown debut album by Glasgow bluesman Big George (who sadly died earlier this year), The Alleged Album, comes out on Ozit Records. Looking particularly worthwhile for both blues fans and Elvis enthusiasts is Chrome Dreams’ new compilation, The Memphis Blues Collection: Elvis Presley & the Songs That Drove Him Wild. Featuring two CDs of all manner of jug groups, Beale Street bands and early tracks by greats such as Howlin’ Wolf, B.B. King and Arthur ‘Big Boy’ Crudup, it’s got one hell of a track listing and, for the real anoraks, extensive liner notes detailing the reference points The King used for his own music.

Most prominent on the gig front is this year’s Newark Blues Festival in Nottinghamshire, hosting more than 35 bands over three days in various venues throughout the town. Standout acts on the bill this year include The Hoax, Albany Down, Jo Harman and Ron Sayer Jr; check out The Hoax’s red-hot rendition of the 1955 Muddy Waters track ‘I Want To Be Loved’ below — it’ll knock your socks off!

They’ve got a good month of blues going on at The Flowerpot in Derby with the aforementioned Jo Harman & Company on 6th September, phenomenal acoustic guitarist Kelly Joe Phelps on the 12th and stateside blues-rock from The Royal Southern Brotherhood on the 27th, who are also playing at The Robin 2 in Bilston the night before. Inimitable blues revisionists the Alabama 3, meanwhile, are putting on a special acoustic show at The River Rooms in Stourbridge.

Roots-rockers Moreland & Arbuckle hit the Midlands twice before going back to the States this September, with a date at the Jamhouse in Birmingham on the 10th and one at Farnsfield in Nottinghamshire on the 14th. Also from the USA, the sensational Larry Miller will play Gloucester Guildhall on 21st September. Watch some of his superb guitar playing in the video below!

One more thing: BluesFest 2013, at the Royal Albert Hall in London, takes place this autumn from 29th October to 1st November, and has an impressive lineup including Bobby Womack, Van Morrison and Robert Plant, presumably tailoring blues sets for the event (though I could be wrong)! The final day, at least, promises some true blues with Van Morrison & Mick Hucknall’s All Star Tribute to Bobby Bland, and a headline act of The Ronnie Wood Band paying tribute to Mississippi legend Jimmy Reed.

‘Til next time; I believe I’ll dust my broom…