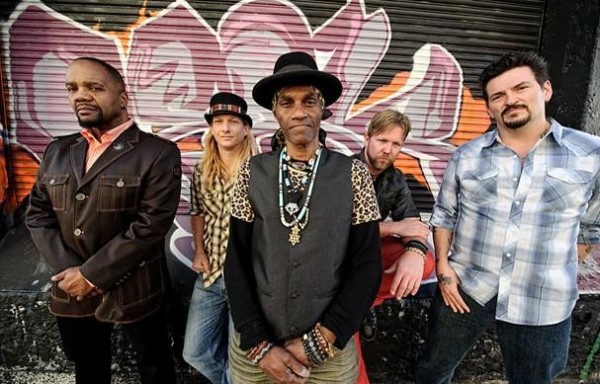 News from the States opens this month’s Nothin’ But The Blues, with the results of the 35th Blues Music Awards, held on 8th May, in from Memphis. Big winners on the night included the Tedeschi Trucks Band – who won both Band and Rock Blues Album categories, as well as Contemporary Blues Female Artist for singer Susan Tedeschi – and the widely-celebrated tribute album Remembering Little Walter, which topped Album and Traditional Blues Album categories. Trampled Under Foot won best Contemporary Blues Album for Badlands, while Best New Artist debut went to Shawn Holt and the Teardrops for Daddy Told Me. Many of the award nominees performed during the seven-hour ceremony and, in more good news, President of the Blues Foundation Jay Sielman announced they’ve now raised enough money to begin construction of the Blues Hall of Fame, starting 1st June. You can see all winners and nominees here.

More news from across the pond is that Royal Southern Brotherhood (pictured) will return with their second album, Heartsoulblood, on 16th June via Ruf Records. “When we went into the studio for the first record we were a bunch of musicians making a record,” says guitarist Devon Allman. “On Heartsoulblood, we’re a band.” The album comes days ahead of the start of a UK tour, on 20th June, for the New Orleans-based group – keep an eye out on Midlands Rocks for a review of the album soon.

Also Stateside, Ronnie Earl – named best guitarist at the Blues Music Awards – and the Broadcasters will release Good News on 16th June, via Stony Plain Records. The mostly instrumental record will feature guest appearances from vocalist Diane Blue and guitarists Nicholas Tabarias and Zach Zunis. Meanwhile, Vancouver quartet No Sinner have released another video from this year’s debut Boo Hoo Hoo, this time for the song ‘Runnin’’ – have a watch below.

Elsewhere in the world of new releases, boogie woogie piano man David Vest releases his fifth collection of fast-paced 12 bar bashes and country and blues-influenced rock, Roadhouse Revelations, in the UK on 2nd June. That’s also the same date for the UK release of sassy soul-blues singer Kelley Hunt’s latest record, The Beautiful Bones – sure to get you movin’. Enigmatically unpredictable avant garde composer and multi-instrumentalist Elliott Sharp takes another exploration into the blues with his project Terraplane on new album 4am Always, following his collaboration with Hubert Sumlin on 2012’s Sky Road Songs. The album will be released via Enja Yellowbird on 2nd June.

Gig-wise, The Robin 2 in Bilston this month has a host of awesome blues shows on, with Chicago singer Angela Brown and the Mighty 45s on 3rd June, award-winning blues/roots group Babajack on 18th June, and a double-header from Mitch Laddie and Federal Charm on 24th June. At the Derby Flowerpot, meanwhile, blues songstress Clare Free will be performing an acoustic show on 11th June (you can read our review of her latest album, Butterflies, here).

Further ahead, Irish guitar hero and blues-rocker Simon McBride has announced he’s taking his band on this road this October for an eight-date tour of the UK, including an appearance at the Derby Flowerpot on 30th October. If you didn’t get to catch the virtuoso last time around, check out this storming rendition of his ‘So Much Love’ at The Bullingdon in Oxford last year:

In case you missed it, I recently got to talk to Detroit blues-rocker and P-funk fanatic Paul Lamb about his two albums-in-progress (one acoustic, one not) and an all-new project featuring Detroit musicians – read the interview here.

And lastly, there’s a campaign out to save Muddy Waters’ house from demolition, spearheaded by sons Mud and Big Bill Morganfield and attorney Jay B. Ross, who are asking for funds to purchase and preserve the historic building. Once the house is purchased, The Morganfield Foundation hopes to create a community resource that preserves Muddy’s legacy. You can donate here, and you can watch Mud Morganfield talk about his father’s house in the video below.