Hello and welcome once again to another instalment of Nothin’ But The Blues, covering news from across the world of blues music. 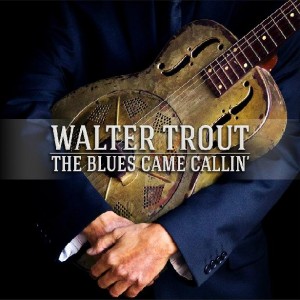 Firstly this month all of us at The Midlands Rocks would like to send our best wishes to awesome axe-master Walter Trout, who is currently resident at UCLA Medical Centre, where he’s in urgent need of a liver transplant. It’s not all bad news from the Trout camp however, as he’ll be releasing his new full-length, The Blues Came Callin’, via Provogue Records on 2nd June, even featuring some appearances from UK blues legend John Mayall. Eager to hear some? Check out the video below, that gives a little insight (and a few audio clips) into the making of the album. Being released the same day is a new official biography detailing the life of the man, Rescued From Reality, written by British music journalist Henry Yates. Get well soon Walter!

There’s plenty more in the way of new releases on the horizon, with Bonafide frontman Pontus Snibb releasing his solo blues-rock album, Wreck of Blues, on 28th April through Off Yer Rocka. Expect strong old school blues and swamp rock influences as Snibb takes his new music in the same vein as Hendrix and ZZ Top and – if you can’t quite wait until the 28th – he’ll be putting out a lyrics video for lead single on 15th April. Also upcoming from Off Yer Rocka is Heavy City Blues from The Vargas Blues Band, a new collection of blues-tinged hard rock, which will be preceded by the new single from the LP, a cover of the Everly Brothers’ classic ‘Love Hurts’, on 22nd April.

A couple of years ago, The Strypes showed us all that not only was true RnB not dead, but some of the kids were even into it too – now tearing into the limelight are the incredibly talented young group The Mentulls, who, it’s recently been announced, are already working on their third album, produced by Wayne Procter (of King King) and due to be released later this year. Watch the live clip below for proof that these whippersnappers can really swing.

Also working hard are Vancouver’s blues-heavy RnR quartet No Sinner who, following lauded shows at this year’s SXSW in Texas, are hitting the UK for a tour this May, including an appearance at the Dot to Dot Festival in Nottingham on the 25th. Listen to their new jazzy single, ‘Love Is a Madness’, below.

On the road off the back of their debut EP are Band of Friends, the group featuring former Rory Gallagher bandmates Gerry McAvoy and Ted McKenna. The band, who released an EP/DVD, Too Much Is Not Enough, in March, will return to tour the UK in May, including a date at the Flowerpot in Derby on 15th May.

On the subject of live shows, if you didn’t manage to catch Chantel McGregor at The Robin in Bilston last month, then be sure to check out Paul Quinton’s review of the set right here on Midlands Rocks!

On May 5 the Kenny Wayne Shepherd Band is due to release an album of covers via Mascot Label Group, Shepherd’s first studio project since his time as part of blues-rock supergroup The Rides. With a 12-song track listing featuring numbers penned by the likes of Willie Dixon, the record is shaping up to be an awesome tribute.

Praised blues singer-songwriter Ian Siegal will also be putting out a new record in May, with a solo live album due to drop on 12th May via Nugene. The new set, recorded at the Royal Albert Hall in London last year, will be followed at some point by another concert due for release, after being recorded at the North Sea Jazz Club in Amsterdam on 17th April.

Taj Mahal is also planning another album, six years after 2008’s Maestro. The follow-up, Mahal’s 26th record, is expected to be released by the end of 2014. Another legend, Texas’ Johnny Winter, meanwhile has just completed his second Roots album, featuring another set of tracks that all helped shaped the 70-year-old guitarist. Tentatively set for release in June or July, Winter recruited help from a thoroughly unimpressive list of nobodies including Eric Clapton, Dr John, Ben Harper, Mark Knopfler, Billy Gibbons and Joe Perry! Rumours are that he originally wanted to recruit the entire band from the end of Blues Brothers 2000 (!) Keep your eyes peeled for a release date for a new documentary detailing Winter’s life, Johnny Winter: Down & Dirty, which premiered at this year’s SXSW – you can watch the trailer below.

Another legend soon to be back in the biz is Bluesbreaker John Mayall, who will be releasing A Special Life, his first studio album in five years, in May via Forty Below Records. The record will be followed by a UK tour in October and November.

And speaking of British blues, Todd Sharpville and Dani Wilde will be sharing stages across the UK in May and June as part of a unique acoustic tour, titled Two Guitars And A One-Eyed Dog. Midlanders, be sure to get yourself down to the Stourbridge show on 17th May!

And finally, some mainstream news: The Black Keys’ new album, Turn Blue, is to be released on 13th May via Nonesuch Records, while Jack White has also announced the release of his second solo album, Lazaretto, through his own Third Man Records, on 9th June. What better way to sign off than with his groovy high-gain blues instrumental, ‘High Ball Stepper’, taken from the upcoming album? ‘Til next time!