NORDIC UNION is the successful collaboration, built by Frontiers President Serafino Perugino, between singer Ronnie Atkins of the legendary Danish hard rock institution PRETTY MAIDS and the up-and-coming Swedish songwriter and producer Erik Martensson of ECLIPSE and W.E.T. fame. The partnership between the two Scandinavians came about sometime in 2015 when Atkins was sent a bunch of demos put together for him by Martensson. The enthusiastic reaction from Atkins sparked a brand new musical alliance that culminated in Nordic Union’s self-titled debut album, which was released in January 2016.

Ronnie Atkins says, “I feel great about this new album! Whereas the first album was a bit of a “pilot project“, since we didn’t really know each other that well, this time it was more of a collaboration since we talked a lot about the direction of the individual songs, as well as me being more involved in the songwriting, though mainly lyrically. The first album turned out quite well and I still think it’s a great debut, to be honest. But from when we decided to do a second one, we kind of agreed to not just copy the first album, but without stepping too far away from the original formula and I think we succeeded in that. “Second Coming“ is a bit more mature, so to speak. A bit deeper, melancholic if I may say so, but still with great melodies and hooks! More unified, really and I’m pretty convinced that those who liked the first one will dig this one too.”

Says Martensson, “with this album we took the bits and pieces that what we liked on our debut album and used those as a starting point when we started to write. What we aimed for was to create our own sound and identity and I think we achieved that goal. There are Nordic folk music influences, a bit of melancholy, and absolutely packed with melodies. I love how it turned out. Also, Ronnie Atkins is a fantastic singer and it’s truly an honor to have the opportunity to work with him.” 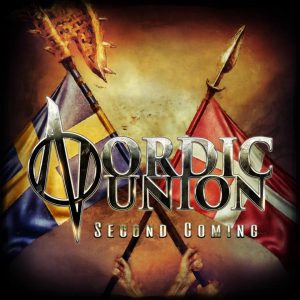 Heavy riffs, soaring vocals, thumping beats, and a grand ballad… this album has it all and flows perfectly with songs that are memorable, rocking, and of course, melodic. Prepare to delight your ears with a killer new album from the sensational Nordic musical alliance known as Nordic Union!