In true Stalinist fashion the early ‘80s have been retrospectively airbrushed with neon pinks and blues but that couldn’t be further from the truth. With three million unemployed, inner city riots on crumbling council estates and under the constant threat of nuclear annihilation things looked decidedly grey. Fortunately, such conditions can make for great music and that era was documented by the fledgling No Future Records.

Formed by two music obsessives (Chris Berry and Richard Jones) in 1981 with no remit, only a desire to release records by the bands they liked, No Future quickly came to prominence as the punk label, fermenting and nurturing punks second wave, and No Future: Complete Singles Collection is not only a great anthology but it also makes the perfect soundtrack to those turbulent times. 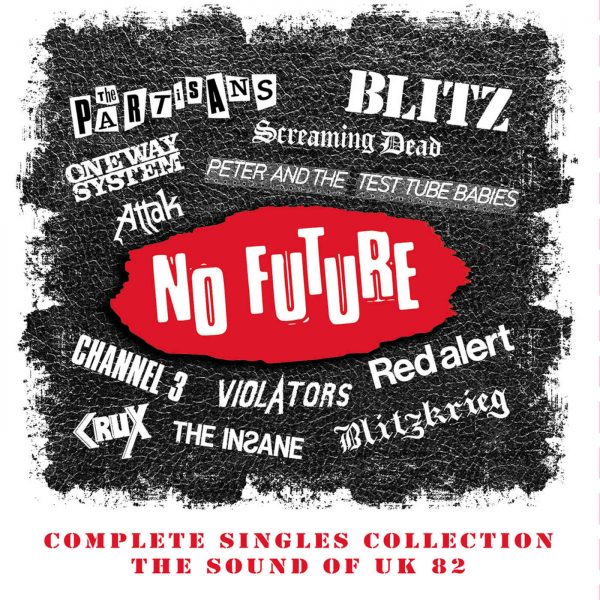 Of course, a record label is nothing without bands so Chris and Richard simply put an advert in music weekly Sounds seeking suitable groups and subsequently an avalanche of demo tapes poured in. From those hundreds of initial demo tapes Blitz stood out like a shiny Dr Marten and their All Out Attack EP was chosen as the labels first release. Hailing from New Mills, Derbyshire Blitz were a 50/50 punk/skinhead combination with an equally ferocious sound. With all the needles firmly in the red the four track All Out Attack is the sound of a street gang with its back to the wall as tracks like ‘Someone’s Gonna Die’ and ‘Fight To Live’ are the sound of undiluted proletarian rage. It’s no surprise that All Out Attack went on to sell over 25,000 copies and provided No Future with a solid financial foundation.

By 1982 punk had dispelled with the art leanings of bands like the Pistols in favour of something more straightforward. Out went abstract notions of situationist existentialism and in came a sound that went straight for the throat. Leaving little doubt to their message Bridgend’s The Partisans delivered No Future’s next single in the shape of ‘Police Story’. Coupled with the pacifistic ‘Killing Machine’ it’s an irrepressible slab of wax laden with an undeniable rage that leaps from each groove. Beneath a teetering mound of demo cassettes, No Future’s next move was to release a 12” sampler that showcased the best of UK82 with Blitzkrieg, The Violators and Pseudo Sadists (amongst others) many of whom would go on to have a long association with no Future.

There were no wordy contracts for those who signed with No Future, only a verbal agreement that split all proceeds 50/50 and the label would only release records by bands they liked. While this might sound chaotic somehow it worked and nearly every single hit the upper echelons of the (then) important indie chart (and in the case of Blitz’s debut album gatecrashing the national Top 30). This box set presents the No Future singles in chronological order and it’s a marvel to hear how each band, given complete artistic freedom, developed and blossomed. From their raw furnace blast on the 12” sampler by the time they released their debut single a mere four months later The Violators had evolved into an outfit that broke away from the three-chord template to deliver five minute slabs of fury.

America’s Channel 3 were the only band outside the UK to receive a No Future release and, despite having a sound more akin to Canada’s D.O.A., their pop-punk leanings don’t seem out of place and the three track ‘I’ve Got A Gun’ testifies to Chris and Richard’s ‘like it, release it’ ethos. Other highlights on this disc include Sunderland’s socialist skins Red Alert delivering a surprisingly restrained ‘Take No Prisoners’ while The Samples ‘Dead Heroes’ really should have done better business. The ever-irreverent Peter & The Test Tube Babies deliver two mini vignettes on the ‘Run Like Hell’/’Up Your Bum’ 7”. Blitz were an ever present and ever reliable on No Future and ‘Warriors’ poured petrol on the fire to ignite a summer of civil disobedience.

Many have derided the UK82 scene as being too uniform: all acne, leather, bristles and studs yet there’s a whole raft of musical variety on offer. Crux and Crash shared a split 12” in December ‘82 with Crux unleashing a more nuanced take on the genre as opposed to Crash’s deviation into the anarcho-punk sphere. Like Siouxie and the Banshees on amphetamine The Violators deliver ‘Summer of ‘81’ and couple it with the equally virulent ‘Live Fast Die Young’. Red Alert are their usual confrontational selves on ‘City Reaction’ while ‘Negative Reaction’ seems tailor made for the live environment.

Often referred to as ‘Thinking man’s Oi!’ The Wall released ‘Day Tripper’ as a 4 track 7” and a 10 Track 12”. It’s presented here in all it’s 10 song glory and opens with that Beatles cover but things improved markedly when they play their own original material. There’s a definite Gang Of Four vibe going on with their angular and discordant rhythms with ‘Ceremony’ and ‘Industrial Nightmare’ capturing the desperation of early 80’s urban decay while ‘When I’m Dancing’ and ‘Funhouse’ temper their desolation with a defiant effervescence. The ever blasphemous The Blood soften their rage with some cool piano and synths but when they finally let fly they share a sonic space somewhere in between The Damned and Motörhead.

Building on the success of A Country Fit For Heroes a second volume was released in 1983 and this time around it’s Lowestoft’s A.B.H. and Sheffield’s Mania who are the revelations. ‘Country Boy Rocker’ from the former is an incendiary piece of punk while Mania’s ‘Blood Money’ doesn’t hold back and they’re not here to take names. Rose Of Victory perform a passable version of David Bowie’s ‘Suffragette City’ on the a-side of their single but it’s the expansive, post-punk instrumental ‘Overdrive’ on the flip side that really hits pay dirt.

Musically things moved frighteningly fast in the early ‘80s as alternative genres replaced themselves with increasing rapidity. Screaming Dead capture that moment in late ‘83 as punk was morphing into goth and followed a similar trajectory to Batcave bands like Alien Sex Fiend. Less abrasive than the other acts on this collection it could be argued that Screaming Dead kickstarted that whole horror punk movement. Their two EP’s close this collection (sandwiching a Red Alert set) and it’s quite pertinent that they round things off and are symbolic of a greater sonic shift.