Much to the favour of the Egyptian gods…

Nile have been among the most imaginative underground metal bands for almost 20 years. What Should Not Be Unearthed is their eighth studio release and it’s another mind-blowing slab of savagery. Over the past two decades Nile have consistently combined their own distinct interpretation of brutal death metal with a technically accomplished production and level of sophistication that at times almost defies belief. There have been occasional detours but these have tended to be slight rather than major u-turns and their fan base has remained solid throughout. The American trio seem to have been scavenging among the catacombs of Ancient Egypt longer than King Tut himself. Once again the mythological landscape of serpents, gods and pharaohs have provided Nile with the ammunition from which to load their musical weapons of mass annihilation.

Opening number ‘Call To Destruction’ knocks your teeth out with its opening blast and the carnage that ensues ensures this is as hostile an opening track as you’re likely to come across this year. The lyrics will also resonate with anyone appalled by current events surrounding the historic Syrian city of Palmyra and the mindless attempts to reduce the ancient Temple of Bal to dust. A cursory glance over Nile’s back catalogue reminds the listener of their innate ability to come up with astounding song titles. The pick on their latest release is ‘Negating The Abominable Coils Of Apep’.

Karl Sanders deathly barks again leave their stamp on your forehead as aggression levels soar against a backdrop of monstrous riffs and asinine rhythms. Nile have never played the verse-chorus-versus game with their songwriting. As such they’ve never been an ‘easy listen’, even among many death metal fans. The layers arrive like blankets at refugee camp and at times the effect is suffocating. They twist and turn like a predatory python. Just when you think you know what direction they’re moving in they give you the slip and head off somewhere else entirely. As always with Nile, you must work at it to get the most from their challenging time changes. With ‘Liber Stellae Rubeae’ the frantic fretwork ebbs and flows with ever greater intensity with Sanders spitting out the bile that runs through the Mesopotamian mayhem. The tempo finally relents at the start of ‘In The Name Of Amun’ when some traditional eastern sounds are heard with additional female harmonies. A clanging gong signals the boys’ arrival and true to form the south Carolina vets pick up the baton with more frenzied guitar assaults.

The album’s title track has a much slower whining decadent riff carving its way through the ruins with Sanders growling over the top. The execution from Nile is merciless, the distraction of the brief Eastern instrumental ‘Ushabti Reanimator’ aside. It’s followed by ‘Rape Of The Black Earth’ which is every bit as dark and barbaric as its title suggests. The pummelling percussion from George Kollias barely allows you the luxury of drawing breath while the tightness is sealed by the perfunctory riffage supplied by Sanders and the rumbling basslines of Brad Parris. ‘To Walk Forth From Flames Unscathed’ is a climactic crusher with a bruising breakdown intro heavier than oil tanker and just as black. The Egyptian gods will continue to look down favourably on Nile while they’re producing records as powerful as this. 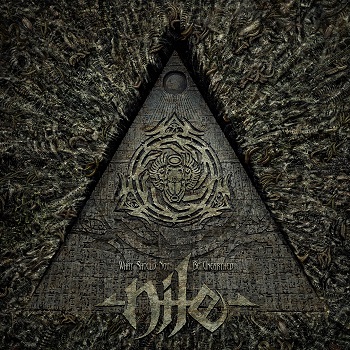