Over the past twelve months, the duo have collaborated on a monumental series of 52 cinematic instrumentals inspired by the Universe. These works will be presented across four 13-track, individually named albums, as the Astronomia project. The first release ‘The Fall of Saturn’ dropped on the Spring Equinox (March 20, 2021) and ‘The Rise of Lyra’ will be followed by two further records, released on the Autumn equinox and Winter solstice of this year. 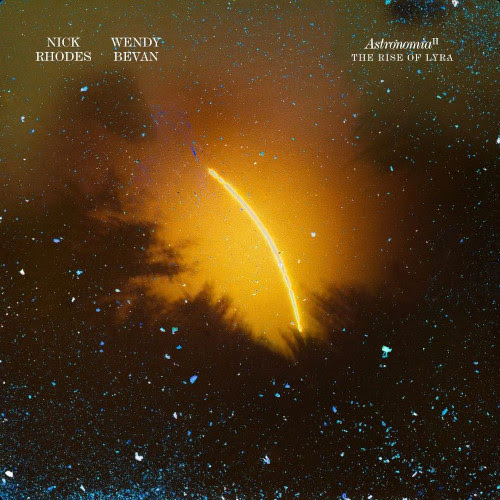 Rhodes and Bevan first started working together during 2018, instantly conceiving an exquisite, and very visual musical language. As artists, separated by the oceans, Wendy in Los Angeles and Nick in London, these works were made as a direct response to the sadness and turbulence of the past year.

About the second chapter of the project the pair said;

Nick Rhodes
“Wendy and I began a musical journey not knowing where it would lead us.  We learned more along the way, through each twist and turn, but managed to closely guard the mystique as we delved further into the darkness of space. It was the intrigue of the unknown that steered our project, each soundscape creating a new terrain leading to the next. As the music varies greatly, from calm ambience to grand orchestral, this gave us infinite possibilities for drama and dynamics across each record and the entire series.

When we began work on the second album, our musical language had already been established, and so as we wrote the compositions they developed in surprising new ways. Because of the scale and constantly changing shape of whole project it feels holographic – I found myself trying to seize opportunities before they passed me by: an atmosphere, a haunting melody, a foreboding sound, they all drifted in and out of the pieces, slowly forming ‘The Rise of Lyra’. I think we managed to harness the energy and navigate our way through to tell the next chapter of the Astronomia chronicles.

It started to become clear that the musical story of Astronomia was mirroring our times. We didn’t need words, the notes and sounds in each composition conveyed everything we were feeling and wanted to say. The first of our four-album series, The Fall of Saturn, represented the descent into the pandemic, the realisation it was taking control and the helplessness we all felt as we slowly lost our freedoms. ‘The Rise of Lyra’ reflects upon the period following that when the virus had spiralled out of control and taken a firm grip on the world. The realisation of how fragile we are, our search for hope and the moments of desolation.

Throughout the last year, writing and recording the Astronomia compositions was a real lifeline for Wendy and I, it gave us both a sense of purpose during the bleak times and it became our diary echoing every mood and feeling we had as the days passed by.

Being freed from all rules and conventions of traditional song writing was entirely liberating. Without restrictions we were able expand our horizons and we still have not reached the boundaries. It is thrilling to start with a blank canvas, no sketch at all and just see where the notes and sounds lead you.

‘The Rise of Lyra’ references mythology, specifically the dark tale of Orpheus and Eurydice where the power of music is the main theme.”

Wendy Bevan
“Astronomia is a sacred time-capsule that gently cradles the memory of our times in 2020 and the fragility of living on this earth.

Astronomia became a lifeline for me during the lockdown. It allowed me to have a space for my emotions to flow into music, a sacred space to create my own universe, with endless freedom. We had no boundaries. It took me away from the reality of what was happening in the world during the pandemic and gave me a sense of hope.

‘The Rise of Lyra’ is the second album in the Astronomia series. Some of the tracks feel angelic, for example Cats Eye Nebula & Inferno, and elevate us from reality.  These recordings became a musical diary of acceptance, a record of change on a vast scale in our lives. The sonic space the album creates, explores the ebb and flow of emotions that we endured on a global level.

When Nick and I started Astronomia we had no idea of the vast amount of music we would create. Notes kept flowing in response to the situation we found ourselves in, it became a parallel universe with its own unique language, drama and elegance, far, far away from reality.

Woman of the Apocalypse (who in the New Testament is also known as Woman Clothed in the Sun), is one of my favourite tracks on the album. I wanted the vocal performance to sound angelic, eternal and somehow supernatural. I wanted the track to allow the listener to feel that there was something else out there, more glorious beyond anything they had every known or could ever imagine.”

With a shared love of film, photography and style, Bevan and Rhodes plan to accompany each track on the Astronomia volumes with a carefully curated visual, available via their Instagram @astronomiavolumes. A new clip will be released every week for one year, commencing March 20th.