“Suddenly, you were gone
From all the lives you left your mark upon”

The music world is still processing the tragic news that Neil Peart passed away earlier this month following a long battle with brain cancer. Tributes have been flooding in over the past few days from celebrity fans and musicians alike including Canadian prime minister Justin Trudeau who said: “We’ve lost a legend. But his influence and legacy will live on forever in the hearts of music lovers in Canada and around the world. RIP Neil Peart.”

Peart joined Rush just prior to their first US tour in 1974 and would go on to be their primary lyricist over the course of twenty studio albums. As a drummer he was initially influenced by hard rock exponents such as John Bonham and Keith Moon before going on to incorporate jazz and swing elements into his playing style during the 90’s and beyond. And as anyone who saw a Rush show would know, Peart’s drum solo was not the moment to take a bathroom break as the master of his craft found new and invigorating ways to present his skill and technique to a willing audience.

Rush enjoyed a loyal fan base in the UK and Peart had in fact spent a few years in London during the early 70’s trying to establish his music career and working in a jewellers on Carnaby Street. After first performing in the UK in support of 2112, Rush would go on to record A Farewell To Kings and Hemispheres at Rockfield Studios in Wales. As someone who valued his privacy, Peart became uncomfortable with the level of success and attention that the band enjoyed during the late 70’s and early 80’s, best exemplified by his lyrics on ‘Limelight’:-

Stylistically, Rush evolved during the 80’s to incorporate modern sounds and technology but the fans remained with them for the long haul. Tours of the UK became less frequent as they scaled back on overseas commitments albeit three nights at the NEC in 1988 evidenced they were still very much in demand. Peart endured a double tragedy when his teenage daughter was killed in a car accident in 1997 and his wife succumbed to cancer ten months later. Rush went on indefinite hiatus and Peart found solace in travelling through North and Central America on his motorbike, documented in his book Ghost Rider: Travels On The Healing Road.

After marrying photographer Carrie Nuttall in 2000, Peart returned to work as a full time musician with Rush and Vapor Trails was released in 2002. Regular tours followed for the next decade, several of which saw them make a long awaited return to Europe, as the band both celebrated their past and released acclaimed new material; final studio album Clockwork Angels being considered amongst their very best. After the 2015 tour to mark their fortieth anniversary, Peart declared himself retired as he battled tendinitis and shoulder problems. His illness remained private for the past three and a half years and he is survived by his wife Carrie and their daughter Olivia. 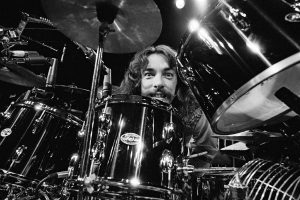