It is evidence of his enduring appeal that Neil Finn can pack out Symphony Hall even when touring as a solo artist and without the wider recognition that comes with performing under the name Crowded House. Nevertheless whilst the faces in the crowd may be the same a Finn solo show is precisely that and not just a trawl through Crowded House greatest hits sprinkled with a few new tracks. Opening with a stark piano arrangement of ‘World Where You Live’ he takes Symphony Hall on an extensive musical journey that takes in solo material old and new, deep cuts from Split Enz and Finn Brothers albums along with rearranged Crowded House favourites. And for a show that nudges towards Springsteen territory in terms of length it also features another mainstay of any Bruce show in that Finn rarely plays the same set twice and is comfortable to indulge his audience in making audible changes and incorporating ad-hoc requests. 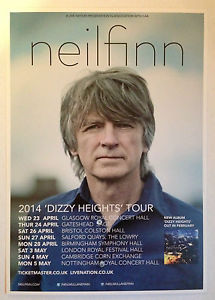 With a (mostly) young and impressive five piece band at his disposal Finn showcases a number of selections from latest album Dizzy Heights, his first for more than a decade, which are built around ornate and expansive arrangements and thoughtful lyrics. ‘Divebomber’,  ‘White Lies and Alibis’ and ‘Impressions’ show that Finn has lost none of his song writing excellence and the knack for combining uplifting melodies with radical shifts in mood and tempo.

Coming across as sincere and warm, Finn engages with the crowd throughout and moves back to the piano for the encores for an impromptu ‘Six Months In A Leaky Boat’ (“one of my brothers songs but I think I can remember it”) and poignant ‘Don’t Dream It’s Over’. By the six song second encore we are into overtime as the band move through the shiny pop perfection of ‘Weather With You’, ‘I Feel Possessed’ and ‘Better Be Home Soon’. A return visit to Symphony Hall from Finn in any of his guises cannot come soon enough.