Before we begin, kudos to CDWA Records for having the guts and ambition to make this happen. They shipped 5 bands and several tonnes of equipment 30 miles into the middle of the Mojave desert and filmed a concert by each band over four days. 24 track Pro-Tools recordings, multiple cameras, drones and epic psychedelic light shows courtesy of The Mad Alchemy Liquid Light Show – projecting onto a four storey high pyramid of boulders. A live double album and DVD of each show will be available to buy from April. Make no mistake, this was quite an undertaking.

The premise was a masterstroke – take 5 desert/stoner bands, a healthy mix of old hands and fresh blood, and set them down in the middle of the desert, the spiritual home, the epicentre of their sound and credo. No crowd, no fanfare, they’re playing to the buzzards, armadillo’s and each other. It was inspired, says producer/director Ryan Jones, by Pink Floyds classic ‘Live In Pompeii’ movie.

So, Nebula. Stoner pioneers, a breakaway band from the legendary Fu Manchu. They had been on hiatus from 2010-2017 and roared back onto the scene with 2019’s ‘Holy Shit’. The evening commences with an interview with the band, interspersed with vintage clips of them in action (one from 2006 where they appear to be playing to about 4 people). The main take away from the interview being that they grew up on skateboards, Sabbath and punk.

And so to the main event. The band drive into the desert on the back up a pickup, strumming guitars as they go. The stage is ready – a semi-circle of amps and mounted arc lights. A wah wah solo burns out into a shriek of feedback and we’re off. The desert sun is setting behind the rocks while the band jam. A car peels through the desert far in the distance, kicking up a trail of dust. 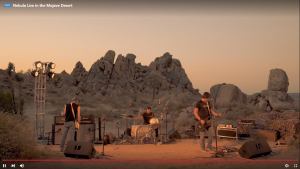 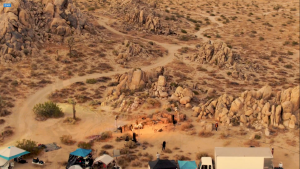 The sky begins to bruise as they tear into their second song – it’s punk, with added fuzz. Eddie Glass gives his extensive pedal board a savage beating. It’s trippy and raw. things become a bit more Hendrix-y and space rock FX drifts in out of the ether. It gets ever darker – Joshua trees are silhouetted against the skyline while towns on the horizon start to switch on their lights. This music isn’t for you, it’s for the hills, the desert plains. It’s the perfect environment for this music – the space, the bongs, no one can hear you, the ‘straights’ are hundreds of miles away.

The band break for a quick mid-gig chat. Glass now wearing a poncho and a gorilla mask (don’t ask). They discuss favourite live albums (Humble Pie, Stones, Motorhead) and concert films (Zep, Hendrix) before plugging back in. The light show kicks in and the barren surroundings come to life. Music and landscape are in perfect accord. A hint of grunge seeps into the sound. ‘Perfect Rapture’ is greasy – it spits and snarls, drones and roars. Glass batters his guitar until it slips out of tune. Undeterred, they plough on. There are mountain levelling blasts of distortion, fucked up ambient drones and a final, furious finish. That’s it. Glass strums an acoustic guitar over the credits under the merciless desert sun.

For fans of the sludgier, doomier end of the rock spectrum, this series of concerts is a no brainer. They are things of beauty, brilliantly filmed and staged and Nebula relish the chance to tear it up in the desert. We’ve had Nebula and Earthless so far – still to come are Spirit Mother, Mountain Tamer and, for the big finish…Stoner, a new band formed by Kyuss alumni Brant Bjork and Nick Oliveri. I’ll be there for that one, I suggest that you are too, tickets are still available. 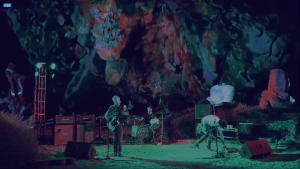 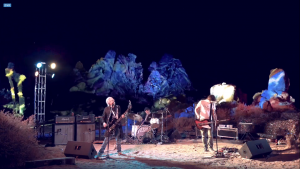 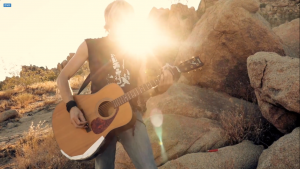