Dan McCafferty has been forced to retire through ill health. Shock horror. This band is indestructible, surely? The ultimate rock’n’roll survivor band. 45 years, 22 albums, 30 million sold. There have been times these boys from Dunfermline couldn’t get arrested, but they always bounced back. They’ve been dumped by labels, but always found another. They’ve buried colleagues (RIP Daryl Sweet) and still kept going. And they’ve suffered those inevitable (and usually interminable) line-up changes that afflict almost every band. Despite that, or maybe because of it, McCafferty’s goodbye, Rock’N’Roll Telephone, is a something of a mixed bag, like the band have been saving some of their best songs over the years for this moment, then added a weight of ballast to make up the numbers.

‘Boom Bang Bang’ is the perfect, present day Nazareth track, showing just how much Jimmy Murrison’s guitarwork matters, using his surging strums and fretboard stomps to energise a soulful, slow rolling scene setter, with McCafferty chewing up each lyrical phrase like he enjoys the taste. If you had never realised before, when you reach ‘Back 2B4’ and ‘Winter Sunlight’ it occurs to you that the reason classic rock is called “Classic Rock” is because the artists created something unique out of their influences. Artists lead, not follow, and these tracks are two of the best committed to disc by the band for very different reasons. The first, a bouncy, acoustic guitar driven song expounds the Nazareth philosophy with a metaphorical shrug of the shoulders. . . “don’t look back, it’s just a waste of time”. Then the dramatic, darker second track builds on that sentiment – almost a spiritual contemplation – acknowledging the sum of their years, with a softer lyrical edge. Two songs done in very different styles but still totally Nazareth.

The pounding, clanging title track humorously clings on (as does the song’s protagonist) to the hard living, hard drinking rock’n’roll cliché, while ‘Long Long Time’, slick and deliciously poppy, is yet another example of their enduring ability to surprise as well as satisfy. Elsewhere, the album is solid rather than spectacular, workmanlike rather than wonderful. All that said, as Nazareth albums go, it goes out not with whimper and not quite with a bang, but with enough cool rock, roll and celtic soul to celebrate McCafferty’s massive contribution to the music business. 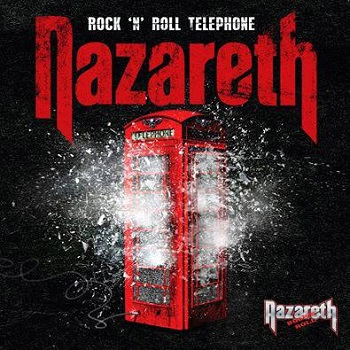