Since forming in Meriden, Solihull, in 1981 Napalm Death have been terrorising listeners for almost 40 years with their incendiary sound. Thankfully, time hasn’t diluted their rage and their latest opus, Throes of Joy in the Jaws of Defeatism, evidences a band who’re not content to tread water and it finds them forging new ground.

Wasting little time on niceties ‘Fuck the Factoid’ arrives wrapped in a ball of sonic fury. With the band scrawling their sound on every available surface ‘Fuck the Factoid’ is akin to standing at the door of a huge furnace as white hot phosphorous flares sear your skin. Blast beats permeate as drummer Danny Herrera mixes up eight notes on the kick and snare drums as the band attack in unison and it all adds up to a pretty intense experience as the group entomb the listener inside walls of glorious noise.

Things are rarely peaceable in Napalm Death’s world and ‘Backlash Just Because’ follows and is introduced by Shane Embury’s trademark bass rumble which drags the listener down to delirious depths as Mitch Harris’ guitar riffs furiously in descending scales giving the whole song a feeling of falling in reverse. There’s little in the way of respite as ‘That Curse of Being in Thrall’ follows hot on its heels with a killer riff and, like a rabid dog, chases its own tail. It’s here that the twin vocal attack comes into its own, adding an extra layer of sound, with Barney’s Pitbull bark tempered by Mitch’s Satanic screech.

It’s been five long years since Napalm’s last long player, Apex Predator – Easy Meat, but despite the increasing lengths between albums there’s no discernable drop in their level of aggression. If anything, the perilous predicament of the planet seems to have increased their rage and gives the songs added punch. ‘Contagion’ harks back the atmospheric Fear, Emptiness, Despair and it feels tailor made for these COVID-19 times.

What sets Napalm Death apart from their peers is a certain forward vision. Throughout their career no two albums (indeed no two songs) sounding the same and Throes of Joy in the Jaws of Defeatism continues that ethos and finds the band incorporating a distinctly industrial edge into their grindcore sound. I’m sure this will alienate some fans (as Harmony Corruption’s dalliance with death metal did) but it’s an amalgamation that works very well, and especially on ‘Joie De Ne Pas Vivre’. With a huge, expansive production it has a definite Killing Joke vibe that seems to emanate from the very depths of hell.

‘Invigorating Clutch’ trades speed for power to deliver a monolithic, pounding song which only makes the musical detonation that follows even more explosive. ‘Zero Gravitas Chamber’ is a succession of hammer blows that leaves the listener dazed and slightly concussed (but in a good way). ‘Fluxing of the Muscle’ exists within a maze of complex riffs and has a dizzying effect while the clean vocals that appear add a touch of gritty realism that step outside the song in a moment of discombobulating existentialism.

Throes of Joy in the Jaws of Defeatism, perhaps more than any other Napalm Death album, is a restrained and measured affair. However, speed freaks needn’t worry as there’s plenty of neck snapping sections, yet there’s also a new texture evident that creates a feeling of something vast, oppressive and immovable. Case in point being ‘Amoral’ that crawls along like Ministry at their sinister best and the result is an earworm that’ll haunt you long after the disc’s stopped spinning.

The title track is a blistering piece of grindcore that looks set to burn itself out on its own circuits before the riff heavy ‘Acting in Gouged Faith’ delivers a rumbustious slice of political defiance. ‘A Bellyful of Salt and Spleen’ is the epic closer, and also the albums pinnacle. Taking the industrial leanings introduced earlier and amping them to the max it exists somewhere between Godflesh and Swans. The lyrics speak of refugees perilously crossing the channel and harks to the bands sociopolitical roots and it’s set to the sound of heavy, grinding machinery that points to a bright future. 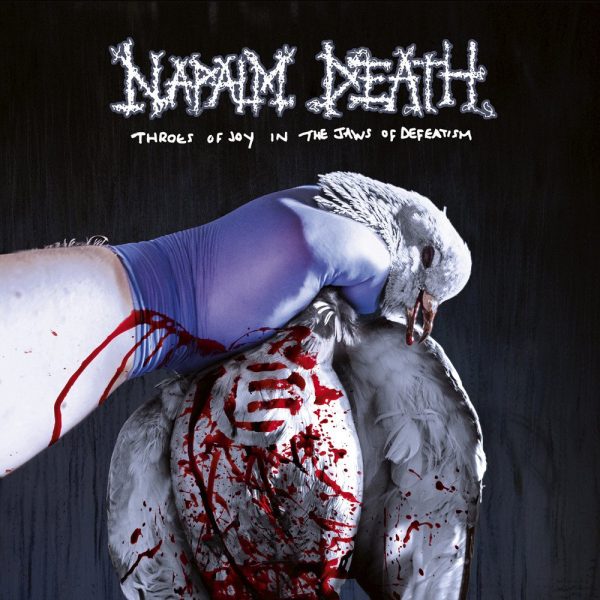