The Birmingham grindcore legends are back and sounding a lot fresher than they should. Almost 30 years since they first charged in to the consciousness of metal fans everywhere, Napalm Death bring you their 16th album and as vocalist Barney Greenway says in the press release, “People probably look at Napalm and think ‘Fuck me, is that band still around?… they must be a bit humdrum now…’ and you know what? That’s something that I hope no one ever says about us.” And it’s not likely to be, despite, some would argue, a few late nineties early / noughties fumbles, Napalm Death have never been humdrum. Always pushing themselves, Napalm Death have become synonymous with what it is to be an extreme metal band, eking their way into the mainstream with appearances on TFI Friday and more recently appearing on E4’s teen drama Skins. If you were to ask a non-metal fan to name a metal band, Napalm Death would be up there with Metallica. Yet despite this occasional flirting with the mainstream, Napalm Death has remained a band that is seen as integrity personified. Their work has always raged with political themes and real anger at the state of the world and it’s perhaps this, coupled with their refusal to rest on their laurels and make anything close to an accessible record, that makes them still such a vital band.

Apex Predator – Easy Meat carries on this tradition with an album that lyrically, tackles “the never-ending cycle of predatory capitalism that causes so much poverty, misery and death around the globe”, and, on the title track, musically throws in one of Napalm’s most experimental curve balls yet. With reverb-soaked chanting vocals and industrial sounds fading in behind, the title track unnerves as it builds. As the vocals distort, a distorted bassline rumbles over the horizon and military drums add to the ominous feel and just as you feel you can’t take the claustrophobic atmosphere any more, the speed riffing and blast beats of ‘Smash A Single Digit’ burst out of the audio fog allowing you to breath out. It’s during these 85 seconds of fury that you realise just how good Napalm Death are, one minute creating an atmosphere of fear and dread, the next taking off with a short blast of grindcore that shits out about 5 riffs that most bands would kill for, one particularly brilliant one turning up in about the last ten seconds.

But it’s not all about speed. On ‘How The Years Condemn’ and ‘Timeless Flogging’ the band locks into a tight groove, and ‘Dear Slum Landlord…’ is built around atonal, droning riffs and a slow, punishing beat. Another standout track is ‘Cesspits’, a song about people “literally and figuratively” living in holes, Greenway stating the subject matter called for a savage delivery – and it certainly has that. Alternating his vocal style between his usual lower register growls and a Seth Putnam-esque shriek gives the track an evil sound and this vocal style returns on the savage ‘Beyond The Pale’ and the insanely fast ‘Stunt Your Growth’.

Sixteen albums in, Napalm Death are still vital, still angry and perhaps most vitally, just as extreme as any band out their right now. Apex Predator – Easy Meat is the sound of a band that won’t be going anywhere any time soon. 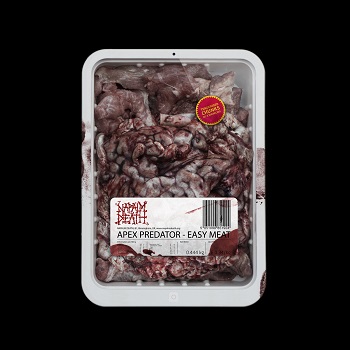