Wow, so these kids know their way around a classic rock toon. Naked Gypsy Queens, a Tennessee four-piece who started playing live together while still in High School have released ‘Georgiana’, their debut EP, and it rocks. It rocks in a Gibson through a Marshall stack, loon pants, scarves over lamps, silk ‘n velvet and a bottle of Jack lurking somewhere in the background style – and does it convincingly.

The EP was recorded in Detroit. In fact, Alice Cooper and Wayne Kramer stopped by to check them out while they were in the process of recording Cooper’s recent ‘Detroit Stories’ album, giving the young band their rock God seal of approval.

So, let’s see what we’ve got here. The band kick off with the very Zep influenced slide riff of the title track. It’s loose, confident, raw. It drops out to launch into a more manic riff and a very cool guitar wig out. ‘Down To The Devil’ keeps up the mood, adding some very sleazy, funky grooves – transporting you effortlessly back to the glory days of the 70’s.

We get a slow, menacing dose of the blues, a nice concise jam and the reverb soaked darkness of ‘Wolves’. It’s full of character and feel, y’know, that stuff that just can’t be faked. We end with the mini epic that is ‘If Your Name Is New York’ – coming on like a younger cousin of Guns ‘N Roses ‘Lies’, until electric guitars join the fray before storming into some more Zep-like thunder and a big windswept solo. Just as you wonder to yourself how amazing this stuff would be live we get to find out with a storming live take on ‘Georgiana’. It’s a beast of a thing, the classic rock feel is detonated – it’s the studio track x10! Louder, rawer, wilder.

Naked Gypsy Queens are absolutely a band to watch out for, they almost seem to be the complete package already. All we need is the killer debut album (and killer it will be). here’s hoping we don’t have to wait too long.

Released on 11 February 2022 by Mascot Records 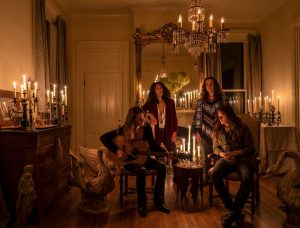