So, album number 13? (14?) from electro/disco industrial pioneers My Life With The Thrill Kill Kult (henceforth known as TKK to keep things short) and nothing much has changed in their…well, frankly pervy world. After an almost ambient intro of zoned out, strung out vocals, B-movie samples and electronica we blast into ‘Forbidden Saints’ and an urgent, fucked up Depeche Mode beat. It’s the Pet Shop Boys after a lifetime of very bad drugs and questionable life choices. The lyrics alone leave you feeling slightly dirty – “pleasure/corruption”, “We’ll take you to heaven and drag you to hell” – but in a good way.

Four tracks in and guitars finally make their appearance on ‘The Chains Of Fame’ (see above), and wonderfully low down and grubby they are too! “How much cash can you make with that ass?” wonders Groovie Mann while slashing bursts of sleazoid 6-string abound.

‘It’s Me Holly’ namechecks Max’s Kansas City and may or may not be about the Holly mentioned in ‘Walk On The Wild Side’. ‘Under A Crown’ is so distorted it crackles – it’s a sleazy, dirty, industrial spaghetti western theme tune…and pervy. With added 80’s soundtrack synths. Which is nice. ‘Am I Dead’ rounds things off in suitably demented style with treated vocals, mondo creepiness and wobbly electronica – sounding, for all the world, like a much watched, somewhat worn VHS horror movie.

A few more quotes for you? “Hustlers wander my mind”, “I’m gonna make me a Hollywood porn movie”, “the world is a feast of carnal desire”. Look at the song titles – these aren’t dudes that have any desire to walk among us in respectable society. Oh no, they’re in the gutter, looking up…and loving every wasted second of it. Ok, maybe a couple of songs could have been trimmed but I think the effect they’re going for is overkill, you’re left feeling sated, ruined, in need of a good shower. I  mean, what kind of desperate filth are they watching to find these samples? Like they say, “strap yourself in, let the madness begin” because dude, this is fucked up.

Released through Sleazebox Records on 14 February 2019 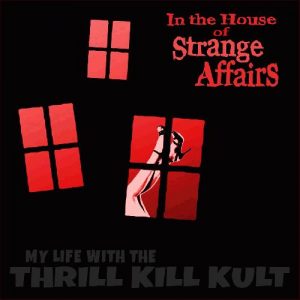