With some bands you only have to hear a few bars and your hooked and that’s certainly the case with My Funeral’s latest EP Graveblaster. Crossover thrash of the highest order it’s a five track, blistering affair that hardly pauses for breath. Their 6th overall release finds this Helsinki mob taking a much more aggressive tone: gone are songs about beer bongs and frat parties for more insular tales of darker states of mind and it certainly adds a level of intensity that was missing in their earlier work.

Opener ‘Thrashcrusher’ begins with a frenetic riff that’s a thing of beauty: fast and unrelenting it could drill a hole through titanium and the ear-shattering scream is the icing on the cake. It’s 90 seconds of pure fury that perfectly marries metal and hardcore. Like Slayer’s ‘Angel of Death’ it thrashes along while the solo recalls the NYHC of Leeway and Frontline while it’s topped with gang vocals reminiscent of Agnostic Front. Playing crossover can be a risky business, fumble the ball and a band can find themselves in a musical no man’s land with no appreciative audience but Graveblaster has it’s chemistry just right and will appeal to metalheads and punks in equal measure. Case in point being next cut ‘Thrash n’ Destroy’. Doing exactly what the title suggests, it’s a song that’s sure to break arms and noses in mosh pits worldwide. Swinging like a huge pendulum everything about it screams mammoth from the expansive production to the pummelling mid-song breakdown to the guitars that scream like Best Wishes era Cro-Mags and throughout there’s a chugging riff that just won’t go away.

The addition of new blood in drummer Tomi Louhesto and guitarist Carlos Correa seems to have galvanised My Funeral into producing their most brutal offering to date. ‘Nuclear Storm’ is the soundtrack to global apocalypse and arrives like a Panzer Division and, slightly slower than its predecessors, trades speed for a crushing, riff heavy demolition of the senses. With foot firmly back on the pedal ‘Retro Satan’ rocks along like low flying aircraft at terminal velocity. Something of a homage to the genesis of thrash it contains all the essential ingredients from the twin guitar attack, double-pedal drumming and Illka Sepponen’s gruff vocals. My Funeral cite Pantera, Motörhead and Hatebreed as influences and you can detect all of these in the groove that permeates final track ‘Disappear’. With an inherent swing it’s all very mosh pit inducing as the riff swirls like a cyclone and, with a dark lyrical bent, drags the listener down towards oblivion ensuring the EP ends on a rather ominous tone.

Moving in a darker direction has given My Funeral an air of menace and I hope that the five blasts of brutality on Graveblaster are a precursor to a full album. 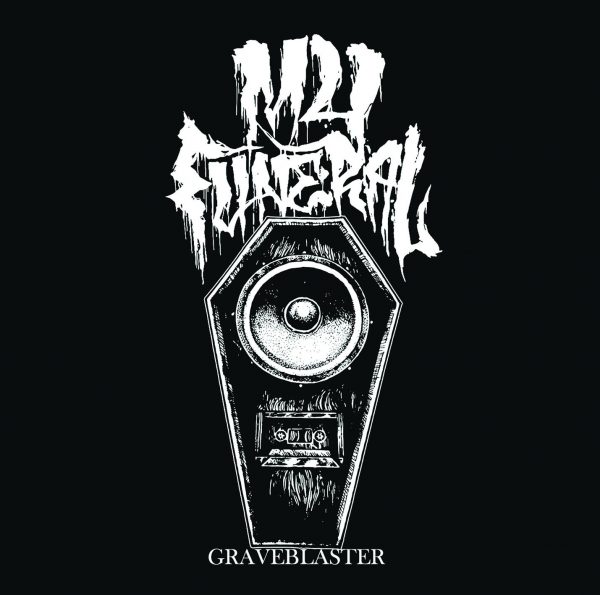