The path of doom is seldom as enjoyably navigated than when accompanied by the majestic My Dying Bride. The Yorkshire pioneers of the goth-doom genre have been evangelical exponents of the dark arts for almost 30 years now and what better way to mark the occasion than with their utterly absorbing new album, and their first in five years, The Ghost of Orion.

From the heart-wrenching opener ‘Your Broken Shore’, it’s evident that My Dying Bride’s many talents remain intact, the distinctive whine rolled out at the start of ‘To Outlive the Gods,’ confirming their gift for melancholic movement remains as steadfast as ever. At times this song almost aches with emotion to the point that you can feel the hairs on your hands start to dance to attention.

On the surface at least all is rosy in the My Dying Bride camp, until that is the onset of the album’s third track ‘Tired of Tears,’ which is ultimately the story within the album. Work had scarcely begun on the band’s first album in five years when the young daughter of singer Aaron Stainthorpe was struck by the cancerous juggernaut that no child, or their parents, should ever have to face.

With thoughts naturally for nothing other than the well-being of his stricken daughter, Stainthorpe walked away from the band with guitarist Andrew Craighan promising to keep the flag flying in his absence – not that Aaron was even contemplating completing the record at this most challenging moment of his life.

With Stainthorpe spending every waking hour by a hospital bed rather than a recording studio, Craighan continued to work on the album, uncertain as to when or even if Stainthorpe would return. As if this wasn’t difficult enough, Craighan was dealt two further unforeseen bodyblows when drummer Shaun Taylor-Steels and guitarist Calvin Robertshaw both upped and left before the album was even near completion. The loss of the latter in particular presented Craighan with a conundrum he was not entirely convinced he’d be able to resolve and it also placed almost the entire responsibility for the album solely on his shoulders.

The reason this record – incidentally the band’s first with Nuclear Blast – has finally seen the light of day, aside from Craighan’s dogged determination, is that Stainthorpe’s daughter thankfully emerged from her fight, the singer then invited back to add his own polish to proceedings. While initially hesitant to return to the band after all that he and his family had endured, Stainthorpe did in his own time consent to return to the studio.

Craighan’s creativity while utterly brilliant, nevertheless left Stainthorpe feeling as though he was on the outside looking in, having not actually contributed to the stunning soundtrack until now. While initially experiencing something approaching writer’s block, Stainthorpe eventually started to reassert his unique crafts and while the emotion on this album, is as so much of My Dying Bride’s work, almost scarily fragile, the only song directly influenced by his daughter is the emotive ‘Tired of Tears.’

Stainthorpe does take a step down from vocal duties on the eerie ‘The Solace’ when Linda Fay-Hella of Wardruna guests in mercurial fashion, accompanied by Craighan’s sublime string work alone. The other guest artist to appear on the album is the acclaimed cellist Jo Quail who helps provide the orchestral flourish which has always been an intrinsic part of the Bradford band’s appeal.

‘The Long Black Land’ is the first of two tracks to brush through the 10-minute mark, and here the lines fall deeper, the vocals a shade harsher and the whole atmosphere altogether more fractious. The album’s title track itself is a tremolo instrumental although a fine ear may just pick out occasional sighs and deep chesty breathing before the cleanly picked intro to ‘The Old Earth’ directs us with almost medieval simplicity back to the band’s main musical path, voices joining in harmony before a trademark My Dying Bride siren call signals a shift into the darkness once more.

Stainthorpe has spoken with admirable openness and honesty about what his daughter endured and hopefully in time he will come to enjoy this album in the way most listeners so far have. Certainly Craighan has blessed these songs with a shape and direction the equal of anything the band has done in the past. So full kudos and respect to him for conjuring up another My Dying Bride classic against an unstable background that no-one could possibly have foreseen when the initial pebbles of creativity were first skimmed into the sonic stream.

Thank heavens all is well in the Stainthorpe family now. Nor does the evangelical Aaron need anything to inspire his morose melancholic tones that have made such an impact on the UK doom scene – and indeed beyond – stretching back to My Dying Bride’s debut release As the Flower Withers on Peaceville Records in 1992.

The Ghost of Orion proves a surprisingly easy album to fall in love with, the deeper pulsating drones augmenting those shimmering riff rainbows. My Dying Bride have again ventured to the well and hooked out more crushing cuts of shattering doom that torments and tugs at your senses and soul while Stainthorpe’s finely chiselled clean segments are in turn embellished by the union with his own gruff growls.

Album outro ‘Your Woven Shore’ provides a restful and angelic closure, low moody keys marking out the exit path to My Dying Bride’s 14th album, a shining triumph in the face of adversity.

Released via Nuclear Blast on 6 March 2020 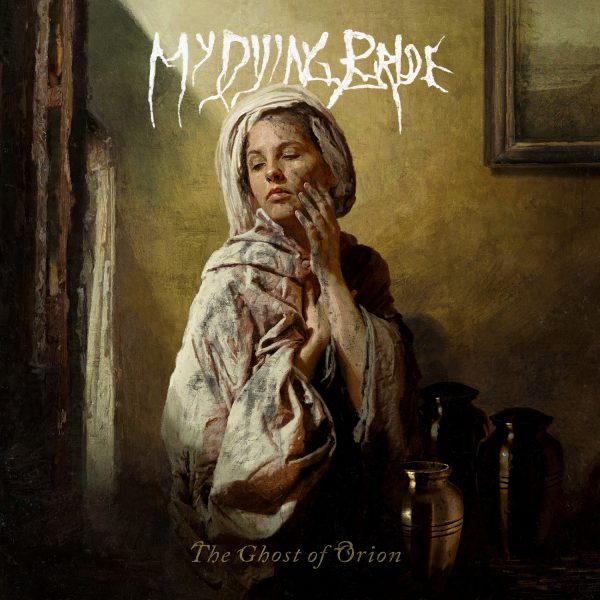