Paul ‘it’s all Greek to me’ Castles gets entangled with Murder Made God’s new album Enslaved, just released on Comatose Music

Next time you fancy a serious slab of clenched fist death metal then Murder Made God will be only too happy to take your order. Calling your second album after one of metal’s most respected and best loved bands is arguably not the cleverest of choices, but putting that minor caveat aside, Enslaved is a pretty meaty beast of a record. Murder Made God’s 2013 debut Irreverence saw the Greek gore fiends lift the lid on their own savage take on traditional old school death metal. Enslaved takes things up a further notch.

This is their first release on the excellent Comatose Records, home to a steaming sackful of nut-crunching acts including Atrocious Abnormality, Possessed Entity, Aborted Fetus and Dysentry. While Murder Made God deliver the requisite brutality by the shovel-load, they also unleash a feast of rabid riff work and towering grooves. All of these elements, along with the great death metal growls from singer George, collide at a hell for leather pace but one intertwined with impressive intricacy sufficient to maintain your interest throughout. Although often compared to Polish dynamos Decapitated, they’re also in places slightly in the same mould as New York wrecking machines Dying Fetus.

Opening track ‘Victims’ spells out Murder Made God’s approach from the off, with some boot-shaking blastbeats as the Greeks quickly and convincingly find their stride. By the time we reach ‘A Morbid Institution’ George sounds like he’s got a giant lump of coal in his mouth and the stop-start groove has your head spinning like an owl’s. Anyone feeling as though they’ve just fallen to the bottom of the well should possibly skip ‘Depression’ which is another mighty slam to the stomach finally winding itself up with a gritty fuzzed up groove. ‘Assassinés!’ has the kind of delicious blastbeat that has the power to open up the pit as easily as slicing through a treacle tart.

The album is over and dusted in half-an-hour but the psychology behind these 10 tracks is to get the job done with few frills. Enslaved isn’t the most original album to land on my desk of late, but as far as bludgeoning beats go, you get the full quota. 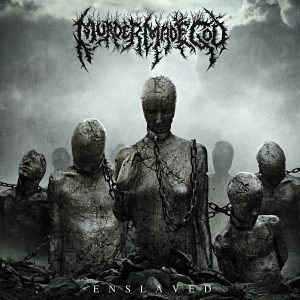