Having an international number 1 as your debut single can be a blessing and a curse. Sure, it can raise your profile but it also sets an impossible precedent. Having sold 30 million copies ‘In The Summertime’ has eclipsed much of Mungo Jerry’s subsequent work. That’s a shame because they were a band of great depth as evidenced by A & B Sides and E.P. Tracks 1970-75 which shines a light into the dark recesses of their early discography.

Taking their musical cues from American folk, skiffle and jug bands whilst injecting a quintessentially English eccentricity Mungo Jerry must have seemed like interlopers when ‘In The Summertime’ hit the top spot in 1970. Time has in no way diluted its sunny charms and it remains the ultimate feel good tune. One of the very first maxi-singles it featured two songs on the flip: ‘Mighty Man’ with a kazoo solo (later utilised by Shonen Knife) and a cover of Woody Guthrie’s ‘Dust Pneumonia Blues’ which positioned Mungo Jerry as a kind of British Captain Beefheart.

Running chronologically this set features tracks from Australian, French and US singles but, rather confusingly, Mungo’s next UK 7” didn’t arrive for seven months. Such time in popular culture is aeons and ‘Baby Jump’ is far removed from their sun-kissed debut. Released in the midst of a British winter it’s a riff heavy, bruising affair that foreshadowed the hard rock of Quo, and god only knows what the teenyboppers made of its lyrical allusions to Lolita and Lady Chatterley’s Lover. Despite its muscular, punchy nature (or possibly because of) ‘Baby Jump’ scored the band their second UK number 1.

Mungo Jerry’s third single was the elegant ‘Lady Rose’. With shades of country and western, a sublime beat and close vocal harmonies it seemed set to become their next chart topper. However, elsewhere on this four track maxi-single was ‘Have A Whiff On Me’ and it’s allusions to casual drug use was too much for the BBC who pulled out the rug and ensured it stalled at number 5. Perhaps their strongest set to date the band out-Elvis-Elvis on ‘Milk Cow Blues’ while ‘Little Louis’, a homage to Americana but with an English twist, ensures this disc ends in a jaunty, beer-swilling fashion.

A two-fingered salute to the nations hoteliers and inn keepers ‘You Don’t Have to Be In The Army To Fight In The War’ was accompanied by a loose back beat and found Mungo Jerry moving away from skiffle toward the heavy blues of the following ‘The Sun Is Shining’. By the time 1972 rolled round line up changes and the addition of a drummer found the band stripping down their sound and taking a more direct route on the French single ‘On A Sunday’ but its flip, ‘There’s A Man Going Round Taking Names’, is pure protest rock that harks back to the bands origins.

Later in ‘72 Mungo Jerry released their finest album, Boot Party. Housed in a distinctly Clockwork Orange type sleeve the music inside was equally intimidating and ditched the kazoo and washboard in favour of a riff heavy brand of aggro-rock. ‘Open Up’ has shades of Slade and Sweet and a riff not too dissimilar to Bowie’s ‘Jean Genie’ (but remember Mungo were their first) and it stomps like an army wearing Dr. Martens. Next maxi-single featured two tracks from Boot Party (reworked versions of ‘My Girl And Me’ and ‘46 And On’) along with the high octane rock n’ roll of ‘It’s A Goodie Boogie Woogie’.

Now firmly in the rock groove ‘Wild Love’(coupled with the even harder ‘Glad I’m A Rocker’) is a real speaker melter. The Little Richard on amphetamine ‘Long Legged Woman Dressed In Black’ proved to be the bands last UK top 40 placing (making a respectable no 13) which is a shame because they were mining a rich seam of high octane rock n’ roll as evidenced by the revivalist nature of 1974’s Rock ‘n’ Roll With Mungo Jerry. ‘In The Summertime’ will probably be reissued periodically for perpetuality and the B-side to its 1975 outing, ‘She Rowed’, brings this collection to a nicely symmetrical conclusion.

Due to the lengthy shadow that ‘In The Summertime’ casts Mungo Jerry are often (and wrongly) credited as being one hit wonders. This collection disproves that assertion and presents a unique insight into one of Britain’s true eccentric bands. 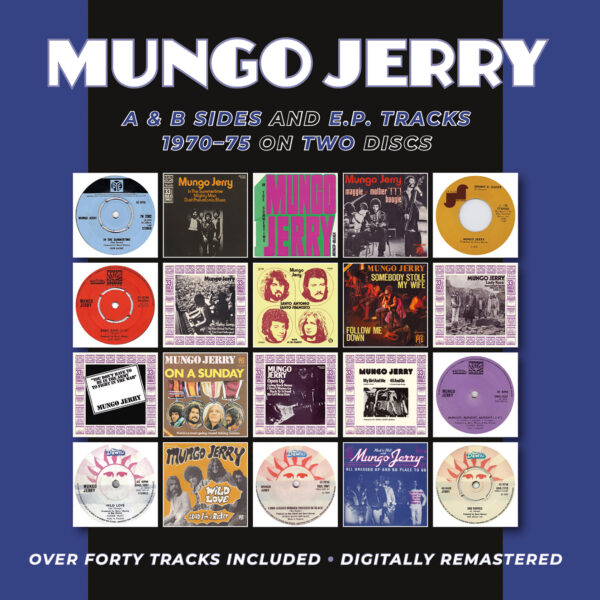