All four original members back together and gaining renewed momentum…

Mr Big survived the grand culling of melodic rock bands early in the nineties. A radical disruption to the order of things that was ignored by a hardcore fanbase and a Japanese market that was virtually untainted by grunge. But by 2002, musical indifferences led to the breakup of the band, only to see them reform, older and wiser, in 2009. They released their first album for nine years, What If in 2011. If nothing else, it proved there was still juice in the tank. Stories We Could Tell is therefore their eighth album. It’s got 13 tracks, suggesting they still have a lot to say, or that they’re wracked by indecision. I’d favour the former.

Martin’s vocal range has now diminished, but is still a distinctive component of the band’s slick-yet-spontaneous and delightfully soulful, bluesy sound. And, wisely, there’s no attempt to update it with cheap, contemporary disguises. The intro to ‘The Monster In Me’ recalls Giant’s ‘I’m A Believer’: a galloping, roller coaster love song that sounds deliciously dated, presenting a powerful argument that the so-called AOR resurgence is in fact entirely fueled by nostalgia.

The star, as on so many tracks here – especially the spiky blues of ‘What If We Were New’ and thundering stadium rock of ‘Gotta Love The Ride’ – is a re-energized Paul Gilbert. His gravity defying fills, frills and muscular riffs haul Sheehan’s lolloping bass and Torpey’s torpedo drums into one almighty, earth-moving groove. It’s not an album for the faint hearted then. None of this mellow-with-age nonsense for these guys.

That’s not to say it doesn’t slow down occasionally… but maybe doing so was a mistake. The acoustic guitar based ballad, ‘The Man Who Has Everything’ comes over as a counterfeit ‘To Be With You’. It’s a step back in time too far, causing a thin tune to collapse under the leaden weight of an awkward lyric. The down’n’dirty ‘Light Of Day’ helps us rejoin the party from the past, allowing Mr Big to overtake many of their peer group, roaring down the highway to the present, eyes on the horizon, presenting us with the nicely old fashioned and eminently melodic ‘Fragile’, perhaps the most accessible of the tracks on Stories...

That said, the powerful, emotive ‘Eastwest’ makes a compelling emotional connection, with a hint of celtic flavouring beautifully teasing out the song’s melancholy tone. You might sometimes wish for a wider field of fire on Mr Big albums, but the quality of these last two tracks is utterly beyond lesser bands who’ve landed bigger headlines.

You can’t help thinking there’s one more great album in Mr Big. Lean Into It (1991) was probably the band at their peak, and none of their releases since then have equaled that album. Paul Gilbert’s departure in 1997 was a major contributory factor. But now that all four original members are back together, What If and now particularly Stories… see them gaining renewed momentum. Long may that continue. 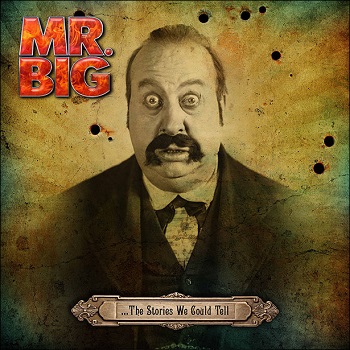