If one band deserves to be more than just a footnote in the annals of rock, then it’s surely the Moving Sidewalks. Primarily known as Billy Gibbons’ group prior to his forming ZZ Top, The Sidewalks melded blues to psychedelia and their one and only album, Flash, had an influence that far outweighed its sales. This loving reissue adds their debut single as a bonus cut and should serve to expand the band’s notoriety.

If you’re a fan of Nuggets style garage rock, then you’ll fall head-over-heels in love with opening cut ‘Flashback’. Awash with organ, punctuated by a punchy riff and threaded together by a snaking solo it’s a kaleidoscopic slice of psychedelia that dazzles the listener with a spectrum of bright colours. However, ‘Flashback’ is delivered with an energy that places it at the edgier end of psych; it’s more Altamont than San Francisco and perfectly captures that moment when the hippy dream turned into a bad acid nightmare. A song of two halves (rather like Cream’s ‘Layla’) it features an outro that’s laced with eastern flourishes. It was a brave move for a young band, but it was one that really worked and was the kind of invention that elevated The Sidewalks above their peers.

The Moving Sidewalks supported Jimi Hendrix on some of his earliest American dates and there was some cross-pollination going on and you can certainly hear some of the Experience on tracks such as ‘You Make Me Smile’ and ‘Pluto – Sept 31st’. The latter in particular has a touch of Axis: Bold As Love in its musical amalgamation and Gibbon’s vocal inflections definitely have a touch of Hendrix. Apparently, Jimi was quite impressed with the young Billy Gibbon so I’m sure there was a “chicken or the egg” thing going on. Yet, the Moving Sidewalks are no mere copyists, and they bring their own style to the table but whatever the direction of travel there’s no denying that Flash is a great listen.

It’s the second half of Flash where things really get interesting and ‘No Good To Cry’ with its staccato riff and soaring guitar solos foreshadowed much of what would come in the following decade. While the first five tracks found the band trying on different clothes; the Stones, Steppenwolf and the aforementioned Experience are all evident in the Sidewalks sound but the swirling ‘Crimson Witch’ and the elongated ‘Joe Blues’ couldn’t be anyone but the Moving Sidewalks. Veering into Captain Beefheart territory the couplet ‘Eclipse’/’Reclipse’ are a pair of musical collages (inserted to mess with your head) and bring the album to a rather surreal close. Included as a bonus is the A-side of their 1967 single ‘99th Floor’, a fine slab of garage rock that makes for a more memorable closer.

The Moving Sidewalks’ upward trajectory was cut short when bassist Don Summers and keyboardist Tom Moore were drafted into the USA army. All they left behind was a handful of singles and this album, but their legacy is assured and Flash remains an undiscovered gem of the psychedelic rock era. 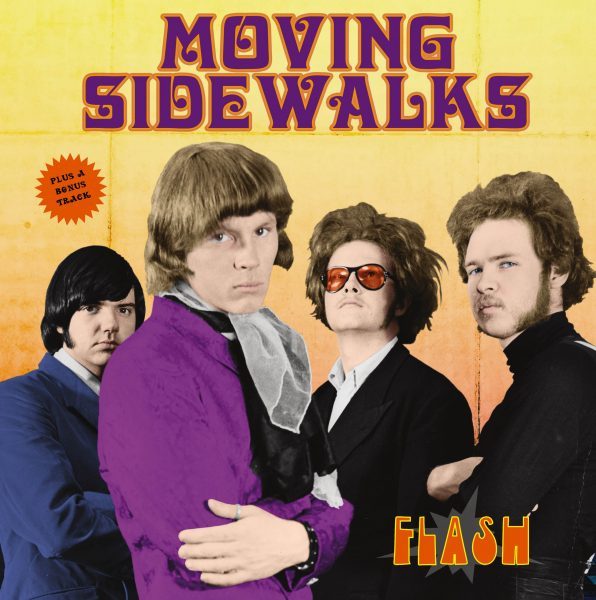