And so we come to the second of our ‘Live From The Mojave Desert’ livestreams – this time from up and coming Californian psyche trio, Mountain Tamer. The basic set up is the same again, an hour or so of interviews, ads and videos and then on to the main event, a ‘Live In Pompeii’ inspired gig in the middle of the Mojave Desert…literally in the middle, the setting this time looks even more remote than the Nebula gig, signs of life are few and far between, you can just make out a road off in the far distance. These gigs are genuinely played to a few cameramen, a handful of drones and whatever snakes and buzzards happen to be nearby. 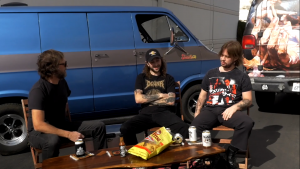 We begin with a few atmospheric, scene-setting and, frankly, stunning drone shots of the Mojave and then we’re off into the mega-doomy riff of ‘Warlock’. Guitarist/vocalist Andrew Hill, referring to the gig, spoke of issues and irritants, namely the scorching desert sun blazing directly onto his pedalboard/rig and one of the first things you see is a roadie wheeling an equipment case in front of his effects to block the sun. Hill also mentioned the annoyance of the sun fuelling their performance and this shows from the off, the scorched fuzz guitar workout of ‘Turoc Maximus Antonis’ dropping out into a tension-charged lumbering jam of a finish.

Bass player David Teget is a star throughout, losing himself in the aural assault, moshing with such commitment that he almost faceplants into the hot sand. He sets up regular relentless thrum’s of background distortion, ear-worrying beehive drones of extreme amplification. ‘Scorched Earth’ does exactly what it says on the tin – it’s chugging riffage descending into a glorious noise breakdown and then, via a smooth gear change, into a garage/punk crescendo. You barely notice the lone car kicking up dust on that distant road (I’m pretty sure it was the only vehicle spotted for the duration of the show).

After a brief mid-gig interview break we’re heads down and off into the final furlong. Venomous amplified drones swirl around the craggy hills before snapping back into fearsome walls of white noise. A beautiful shot of the sun setting behind the outcroppings brings a web of shadows to the desert floor and the sneering riff and vocals of the charming ‘Funeral Of A Dog’, Hill adding maracas to the feedback frenzy.

We finish with the heavy riffage of ‘Living In Vain’ – Teget’s bass is thrown to the desert floor as the song (and gig) crash to a messy, gnarly finish. So there you have it, another glorious hour of being transported to the edge of nowhere, both sonically and visually. Compared to Nebula’s show, this felt like more of a support slot – it was shorter and filmed entirely in daylight, but that didn’t detract from the spectacle at all. The production of these gigs is beautiful – incredibly well presented and filmed, the mix of hand-held cameras and drones works perfectly in these blasted, dramatic surroundings. Next up (on March 20th) is Stoner – the new project from Brant Bjork and Nick Oliveri, and you’d be a fool to miss that! 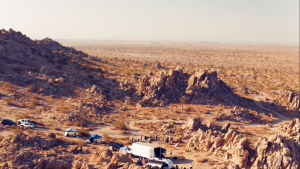 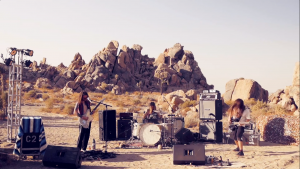