No Hunter, no Ronson, no Hoople…

By 1975, No Hunter, no Ronson and indeed no Hoople. The absolute Mott recorded and released two albums – Drive On and Shooting And Pointing – before eventually disbanding. These two re-mastered versions (superbly done surround sound, it’s worth stating) demonstrate that there was considerable talent living in the shadows. It just never got the chance to grow and bloom.

Up to that point, Hunter and Mick (later Bad Company) Ralphs had done the writing, and it was always going to be difficult filling such a huge songwriting void. And that was the least of their problems. There was the small matter of replicating an instantly recognisable, signature guitar and vocals sound. Fortunately, it had been only 3 years since ‘All The Young Dudes’ (written by Bowie) had turned them into Glam Rock stars par excellence, so there was still plenty of goodwill around.

Overend Watts stepped in to plug the songwriting gap, but the frustration was this: although his writing skills went some way to filling the void, prior to that, real opportunity hadn’t knocked for him. Neglect had stunted his songwriting growth, leaving his skills relatively un-honed. Watts wrote all of the material on Drive On singlehandedly, with the exception of closing tracks, ‘I Can Show How It Is’, and ‘Shout It All Out’, a collaboration with Dale Griffin.

Nigel Benjamin’s vocals had the androgynous tone so much beloved by the era, but had none of Hunter’s ragged edged authority, and the album suffers accordingly. Arranged and produced by the band, it all too frequently suffers from heavy, untutored hands in the studio. ‘Tonight’, buoyed by Stonesy chutzpah and a sharp, spring loaded riff, and ‘Monte Carlo’, a song that loudly echoes the band’s illustrious past, are genuine, top shelf Mott. But elsewhere and too often, Watts seeks compositional safety in unimaginative pop and rock. It’s an undermining weakness that is laid bare by uninspired arrangements. Tracks like ‘She Does It’ and ‘Love Now’ sound like cheap Mott knockoffs. 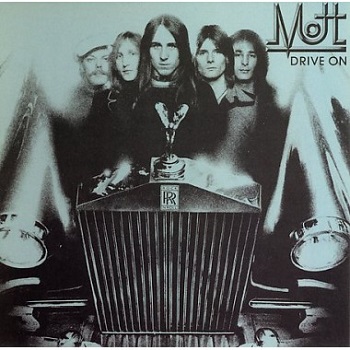 By the following year’s Pointing & Shooting, the goodwill that served them well with Drive On was unravelling fast.   Some magazines of the time condemned the album… and perhaps if you’re used to fine wine then a bottle of plonk might just not be so palatable. It also illustrated what all fans of the band knew.. .in the studio, the raucous, larger than life live band just wasn’t the same animal. Even using Eddie Kramer, the recordings just didn’t quite capture the elemental band that was the original Mott The Hoople. And of course, without Hunter and Ronson, it never would.

While at times, arguably, it sounds like a band finding its feet, there are occasions when it totters on its stacked heels and threatens to crash to the ground in a cloud of frazzled glitter. ‘Collision Course’ and ‘See You Again’ stride out awkwardly perhaps, but are undoubtedly heading in the right direction. But as on Drive On, the better tracks tend to be undone by clumsy, threadbare attempts at reinventing the band’s past.

It’s certainly true that perseverance is a key component of success, but Pointing & Shooting ultimately sounds like a band under pressure, trying too hard to forge its own signature. These two reissues, as is the Rock Candy style, are sumptuously presented, with new sleeve notes, from the band’s biographer, Campbell Devine, and from Joe (Def Leppard) Elliott, and a crystal clear, remastered sound. Neither of the albums represent the band at its peak. Mott The Hoople’s theatricality and musicality departed with Hunter, rendering Drive On and Pointing & Shooting as little more than interesting footnotes in the history of the band. 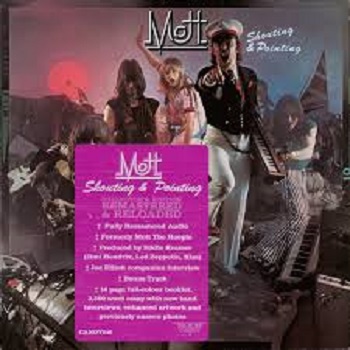