Motorhead. Always great, always a pleasure, but there were two Mecca’s, two hallowed places where the communal experience was optimal, if you were a hardcore fan you simply had to make the pilgrimage. One: Hammersmith (been there, done that, got the tinnitus) and the other: Germany. Never was the rock chestnut “big in Germany” more apt, more fitting, than it was for the ‘Head. It was a mutual love affair – the German’s loved the assault, the blitzkrieg and Lemmy loved (in a platonic way) the World War II memorabilia. It was a match made in…well, perhaps not Heaven, maybe somewhere with a bit more moral ambiguity and a lot more Jack Daniels. Lemmy had, on occasion, implied that Germany had saved Motorhead in the 90’s from ruin and, perhaps, dissolution.

Which brings us to Motorhead’s latest release, ‘Louder Than Noise…’, a live recording from 2012’s Kings Of The Road tour. It was the final night of the tour and found the band, fittingly, in a faceless Berlin enormodome. The biggest German enormodome, in fact, that Motorhead had ever played – packed, as it was, with 12,000 rabid fans. The band sauntered onstage, tuned up…loudly, (a thing I’m sure they did just to scare the audience. And, speaking from experience, it worked. It’s hard to describe quite how loud a Motorhead gig was) said hello, and were off.

This being 2012, Motorhead were still churning out fine albums and so this is not just your standard late-period hits setlist, there is relatively new stuff sprinkled throughout. Indeed the band kick off with ‘I Know How To Die’ which efficiently pummels the audience, tenderizing them, preparing them for the onslaught to come. The production is full and huge and the performance is very much on point. Lemmy, however sounds a little slurred. Perhaps ill health was beginning to creep up on him or maybe it was an early start to the end of tour party, who knows, either way it doesn’t detract from the overall power of the performance, only adding, possibly, a dash of poignancy.

And then we’re into a run of classics – ‘Damage Case’ is suitably low-slung and sleazy while ‘Stay Clean’ features sterling bass work and a huge flippin’ finish, led by the howitzer drumming of Mikkey Dee. ‘Doctor Rock’ receives a deep, sludgy reading – heavier than it’s 1993 ‘No Sleep At All’ counterpart but with a fraction less snap.

Phil Campbell and Mikkey Dee both get a moment in the spotlight. Campbells evocative solo ushers in ‘The Chase Is Better Than The Catch’ while Dee’s drum solo midway through ‘The One To Sing The Blues’ illustrates why Lemmy routinely introduced him as ‘the best drummer in the world’. For a band known for their punk metal thuggery, the levels of virtuosity on display are stunning. But hey, they’d been doing this for long enough to have nailed it and there was never any sign of them going through the motions.

We get a blues, we get a Bonneville salt flats take on Chuck Berry and we get a killer late gig run of stone cold classics. The band are now firing on all cylinders and any early reservations have been brutally kicked into touch. ‘Killed By Death’ leads into a fiery ‘Ace Of Spades’ which, 30-odd years on has lost none of it’s original death-trip sneer, and then the obligatory rampage through ‘Overkill’, with guests Anthrax upping the apocalyptic quota for a messily epic rendition – the stop/start structure of the song stretched out and milked for every last ounce of it’s drama and bombast.

Anyway, enough of my waffle. This is a live Motorhead album, and they play rock ‘n roll. If you want it, this won’t change your mind (and nor should it) and if you don’t…then you probably haven’t read this far anyway. If you have previous live releases (of which there are many) do you need it? Yes. It’s Motorhead and it sounds fucking great. Plus you get the CD and full-length DVD for your money. Nuff said. 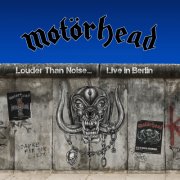