Hotter than the ‘Bake Off’ tent….

Adieu, auf wiedersehen, adios, au revoir, fuck off. There are many ways to say goodbye and Motley Crue have essentially opted for the latter. Albeit a big, dumb, affectionate fuck off wrapped up in a leather clad bear hug and enough explosives to launch a military campaign against a medium sized dictatorship. The LA glam stalwarts wound up their farewell tour on New Year’s Eve 2015 at LA’s Staples Centre. The odds were pretty low that this was going to be a subtle, low key acoustic final bow.

And so it proves to be as the band blast into ‘Girls, Girls, Girls’ (see above). Pyros threaten to take the roof off the place while go-go dancers do their thang and the band take their positions. The Nikki/Tommy rhythm section look disgustingly healthy and lock into place. Vince Neil, despite a few extra pounds and a tad less vocal range, works the throng like the pro he is and Mick Mars shuffles in from the set of a 60’s Hammer Horror film, a strategically dressed semi-reanimated cadaver… Vincent Price must be standing in the wings, beaming with pride at his handiwork. He can still play though.

And they’re off – more pyros (LOTS more pyros; surely they are nipping at Rammstein’s fiery heels). Mick Mars’ filthy slide anchors ‘Primal Scream’ while the rest of the band showboat. ‘Smokin’ In The Boys Room’ ups the ante (although we’re not quite sure who thought it would be a good idea to preface it with a Gary Glitter riff) and Nikki talks to the crowd, brandishing his hunting knife while explaining how it symbolises his “live your dream” ethos before showing off his flamethrower bass… subtle this ain’t.

And then we’re into full on Spinal Tap mode for the drum solo – Tommy playing upside down (on his rollercoaster track over the top of the crowd – obvs) to what sounds like a bizarre mix tape consisting of, amongst other things, ‘Carmina Burana’, Black Sabbath and EDM beats… until his kit gets stuck and two hapless roadies have to scale the track and rescue him! Genius… and pure unfiltered Crue! Totally OTT and more than a tad shambolic!

And then it’s full-tilt into the big hitters, each one played with heart, soul, fire (literal and figurative) and commitment, the band fully aware of what’s at stake. Nikki and Vince head out over the crowd on huge cherry-pickers while enough ticker tape flies around to turn the inside of the arena into a giant snow globe. After yet more pyros, fireworks, streamers, balloons and flaming pentagrams the band head out through the crowd onto a smaller central platform stage to say their last goodbyes… filling up a bit as they play an emotional ‘Home Sweet Home’.

So, yeah… subtle. But exactly how it should be. This is Motley Fuckin’ Crue after all. Yes, they’ve signed a legal agreement to never appear onstage under that name again but I think we all figure they’ll be back at some point somehow – Motley Crew? Muttley Crue? Who knows. But, for now, enjoy this for what it is, a band who know exactly who and what they are playing a pitch perfect, take no prisoners farewell gig. 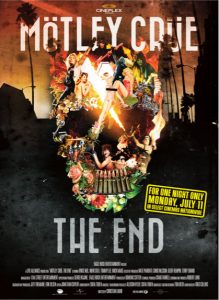