Those who were perplexed and disappointed at Mortiis’ forays into industrial rock and electropop are in for a treat because he’s returned to his roots (quite literally) with his latest album Spirit of Rebellion. Shying from the light and tunnelling deep underground Mortiis has produced a two track opus that’s an expansion and continuation of his classic 1994 debut Ânden som Gjorde Opprør.

The news that Mortiis was returning to the genre of dungeon synth (that he pioneered) set social media alight with anticipation and the teasers released have had fans salivating with delight. Musical deviations forgiven he’s been welcomed back to the fold like a returning hero and it’s been repaid with an album that captures the essence his early efforts. Composed of two 25 minute tracks Mortiis isn’t in a hurry and uses music as a canvas to create atmospheric soundscapes. ‘A Dark Horizon’ opens with huge thundering drums that seem to call the faithful to a black mass. It begins a haunting, grandiose four minute section that introduces musical motifs which will echo throughout the album. While each song is best devoured in one sitting they can be broken down into distinct suites as they ebb and flow and change timbre. As the cavernous introduction draws you in the following section totally immerses you in Mortiis’ perpetually dark world. Haunting walls of choral vocals shift in tonality creating an unsettling vibe before the central motif takes centre stage with cold and brittle electronics descending and dripping like drops from stalactites. Coming full circle pounding drums, Viking like in their enormity, bring the track to a suitably epic conclusion.

Taking the aesthetics of black metal and applying them to ethereal and primitive musical styles ensures that, despite being primarily produced by synths, Spirit of Rebellion has an earthy, organic feel. Melding medieval musical styles to synths creates an interesting juxtaposition between the antiquated and the modern yet they’re effortlessly brought together. There’s also something cinematic about this album, especially the next track ‘Visions of an Ancient Future’. Beginning with tribal drumming it’s both ritualistic and eerie and evokes images of a sacrifice under a blood red moon. Well structured it’s a track that progresses from full passages to moments where synth keys stand stark against a white background. A multi-layered album it’s the kind of record that will reveal nuances, hidden deep in the mix, on successive spins but what holds Spirit of Rebellion together as a cohesive whole is the haunting keyboard motif that echoes, not only throughout the album but as if through time itself.

A stunning return to form from the master of dark ambient and in Spirit of Rebellion Mortiis has reconciled his past with the present and has produced an album that, like a cavernous dungeon, is perfect to lose yourself within. 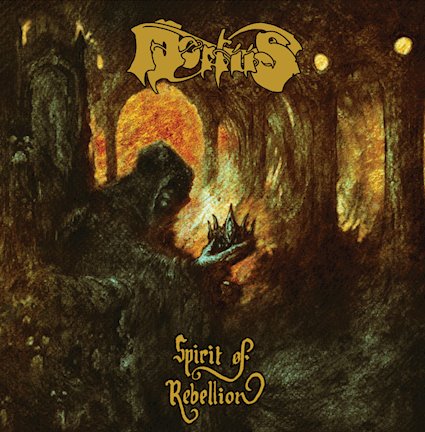