As anyone with even a cursory interest in Black Metal is probably be aware by now, the first turbulent explosion of underground Norwegian bands – and most significantly the ultimately doomed Mayhem – features in the soon to released movie, Lords of Chaos. The so-called second wave of Norwegian Black Metal featured the imperious Darkthrone, a band that Mork have often been aligned with since Thomas Eriksen first embarked on this solo venture in 2004.

While initially seen as something of a side-project – even after the release of two albums – the transition to Peaceville Records, and the release of Eremittens Dal in 2017, really showcased Mork as an uncompromising blackened proposition no longer prepared to play second fiddle to anyone. This was ratified by the assembling of a lineup to enable Mork to perform live, something they have done consistently over the past couple of years.

If Eremittens Dal earmarked Mork as a Norwegian Black Metal outfit of high potential then their latest release, Det Svarte Juv, gratifyingly confirms that previous expectations were not misplaced. Mork are the indeed the real deal and in their frostbitten hands the flames of Norwegian Black Metal are in safe keeping, a fact previously acknowledged by enigmatic Darkthrone frontman Fenriz, and he should know after all.

While the last album featured a couple of well known guests in Silenoz of Dimmu Borgir and Seidemann of 1349, Eriksen has kept things very much to himself on his latest release which opens in understated fashion with ‘M¢rkeleggelse’, before somersaulting headfirst into a wall of blastbeats accompanied by accomplished riff patterns and Eriksson’s sinew snapping vocals. A mid-track momentary intervention allows Mork to reach deeper into the abyss for further dark spiritual intervention before slamming you again in one final tumultuous charge.

The superb foundation to Det Svarte Juv is then built on with the storming ‘Da Himmelen Falt’ on which the opening fires burn like a crematorium on a busy day. ‘På Tvers Av Tidene’ is more menacing altogether, in fact you’ll have to look hard to detect a blastbeat on this haunting slowburner.  Momentum is sustained by a metronomic beat over which  Eriksson’s vocals are almost monastically chanted rather than sung although when he does open up with some terrific extended vocal cries the effect is altogether mesmeric while the rhythmic battery goes into overdrive with crisp cuts bigger than you’d get at your local butcher.

Two years have passed since Mork’s last release and the intervening period has not been the kindest for Eriksson and some of the personal anguish and grief that he has endured over this traumatic period of his life – which he has poignantly described as ‘a tornado of tragedy and misery’ – has been channelled into the very spirit that pervades this new release.

Don’t though allow this to cloud your judgement around Det Svarte Juv. While the sombre strokes of ‘På Tvers Av Tidene’ provide the mournful muscle there is plenty of anger, let’s just call it hate, also waiting to be discovered within these 10 tracks. The blastbeats are there of course and when Mork are at their most feral, such as on the incendiary ‘I Flammens Favn’ the unbridled ferocity unleashed is at times brutal. Even here though Mork marry the violence with verve, the whole package combining seamlessly to create an epic sweeping soundscape.

‘Skarpretterens ¥ks’ is another pounding number in which Mork leave nothing on the periphery. It’s all here the power and the dark glory. A throaty ‘eeeuugh’ beckons the Satanic hordes on ‘Siste Reis’ followed by a hefty chug of a riff that just throbs with evil intent.

Mork are reminiscent of Behemoth in places and it’s hard to pay a greater compliment than that. The connection with the all conquering Poles stretches further as the album sleeve artwork has been created by esteemed French artist, David Thiérrée who has worked with Nergal in the past. Nergal is well known for having his fingers in several pies, even running his own chain of barber shops in Poland. Mork too are diversifying with their own ale now being brewed in Norway. If it tastes as good as they sound then I’m off to the bar now. Hails! 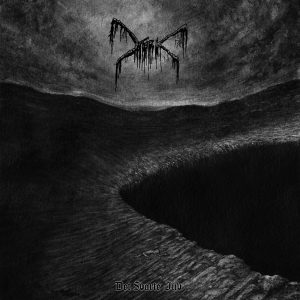 Released via Peaceville Records on 19 April, 2019