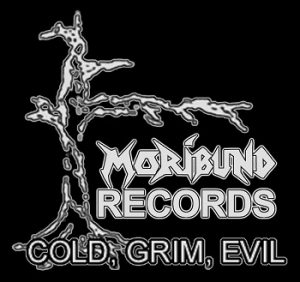 A nail hammered hard into the forehead…

If you want cold, grim and evil metal, Moribund Records is the label to go for (Website, Facebook, YouTube, Soundcloud). And so with four new releases from the label, MR’s Jason Guest sets himself up for a bruising with the following:

So off we go, once more into the black…

Monochrome artwork depicting a winged goat mincing a priest’s head with red lettering for the band and album name? Yep, this is going to get very violent very quickly. Aptly titled, the second album from Portland, Oregon’s Infernus is brutal, every grinding riff is razor sharp and caustic, every drum beat is a nail hammered hard into the forehead, and every word is masticated cartilage spat in the face of the pious and the meek. Add to the contamination a bunch of lunatic lead breaks, the odd bleating goat and orgasmic sigh here and there as well as a King Diamond wail and what you have is an album as dark as it is devastating and as vitriolic as it is sadistic. Reeking of Venom, Bathory, Hellhammer, and Mercyful Fate, Grinding Christian Flesh is fiendishly good.

Luciferian Rites – When The Light Dies

Album number two from Mexico’s Luciferian Rites, the aptly-titled When The Light Dies is black, bleak and tortured. An ice cold album that is an inferno of black metal sovereignty and melancholic depth, this is not for the faint of heart. There’s barely a moment when the band aren’t tearing the heavens asunder. Step into the shadowy world that’s carved into every beat, every riff and every banshee-like wails unprepared and it will tear you to bits. Mercilessly. Pure black metal.

Four years after the delicately menacing and overwhelmingly beautiful brutality of Ab Luna Lucenti, ab Noctua Protecti, Italy’s Abhor are back with their sixth album, Ritualia Stramonium, dedicated to the memory of Errans Infernorum, who passed away March 20th, 2014. And like the previous album, in nine tracks that are as ominous as they are ornate, Abhor once again tread further into ever-darkening territories with a sound exactly like its 70s occult horror flick-styled artwork.

With its coarse production, the album’s antiquated atmosphere is enhanced by the spectral shadow of the throbbing medieval organ that plays over every track. Yes, every track. and though it works particularly well in ‘I…the Witch’ and the beautiful closing track, ‘Requiem For Errans Infernorum’, somewhere around track 5 or 6, with the organ dominating the mix, it tends to overshadow everything else. Track 7, ‘The Chant of The Owl’, is a great track but by then you can’t help thinking it would be much better without letting the Phantom of the Opera loose on it. Across the album, the tracks are all well-written and all are executed with an undeniable conviction, but it’s difficult to digest in one sitting because of that bloody organ…

But two months after the release of the re-recording of his eponymous 2009 demo re-titled as The Third And The Noble, Wende – another one of those ‘best kept secrets’ of the underground – is back with more of his Burzum-worshipping black metal. Six tracks that range between the six- and fifteen-minute mark, Wende gives each track the time and space for every hypnotic passage to take hold, strengthen their grip, and evolve of their own accord.

While tracks 1, 3, and 5 bring together caustic riffs and dark and melancholic melodies against huge walls of black metal fire, with plenty of that Burzum-seque folky nostalgia about them, the ambient tracks between them create a subtler yet no less evocative soundscape. Wrapped up in an ice cold production that curiously dulls the tracks, as with The Third And The Noble, if you want more of what Burzum used to deliver, then this is for you.